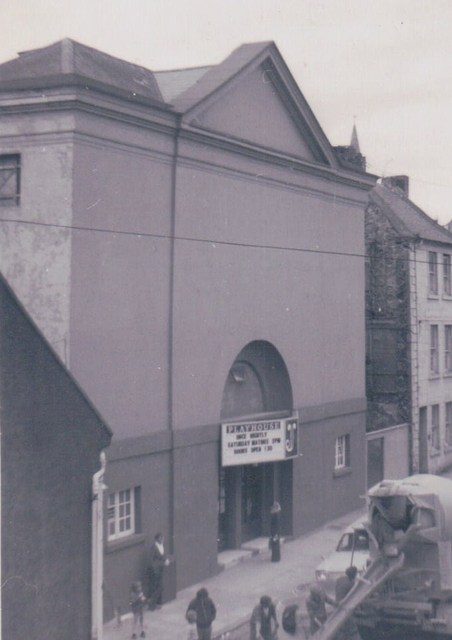 Opened as the Playhouse on 14th May 1914, the opening films were “The Necklace of Rameses” a three-reeler from the Edison Co. and “The First Law of Nature” a two-reeler. Seating for 992 was provided in stalls and circle levels and there were also boxes that held six persons.

The Playhouse continued in use operating as an Independently owned cinema throughout its 91 years life.

Sadly, in August 2005 it was announced that the cinema would be closing at the end of that month and all fixtures and fittings were for sale. After standing empty and unused for five years, the playhouse was demolished in November 2010.

No. Slightly incorrect. It was never known as the Playhouse Cinema, just “The Playhouse”. Building commenced in 1912 as a Music Hall. Throughout its life the stage facilities were in constant use at least once a month, earlier by touring companies, and latterly by variety groups and bands/orchestras and general concerts. The huge stage scenery doors open onto a quite extensive (and so rather handy) free car park at the rear.

Over the past 25 years no capital has been invested in the structure or in its essential maintenance. It was gloomy inside (in addition to appalling ‘modernisation’ circa 1970) and outside it appeared derilect. In the 1990s, somewhat amazingly, (and, even sadly) the twin Gaumont British carbon-burning arc projectors were discarded for a new ‘tower’ projector and some new sound equipment. But appearance is everything in show-business and neither the owner or the last lessee would (or had the capital to) do anything about it.

The Playhouse had great potential and it is tragic that the last big theatre (which until recently seated slightly over 1000) between Edinburgh and Newcastle-upon-Tyne has closed.

I had a copy of the sale particulars and there was no mention of the fittings and fixtures being sold separately. Tragically (again) the Palyhouse has been sold to a building developer.

I am pleased to be able to say that I have seen many films and numerous stage shows there.

There has been correspondence in the local newspaper regarding the Playhouse. Unfortunately I did not save it.
From memory it was claimed by one letter writer that they were the body negotiating purchase and to retain as a functioning cinema which was “very close to finalisation”. However negotiations ceased and apparently sale had been made to a property development company who have other sites in the vicinity.
Another writer said that any hopes of the cinema being returned to function should be dismissed as the property developer had removed curtains, seating and allowed an “archaeological” excavation in the auditorium floor.
http://www.scottishcinemas.org.uk/uk/berwick.html has pictures and other information

At least they said “bye'.