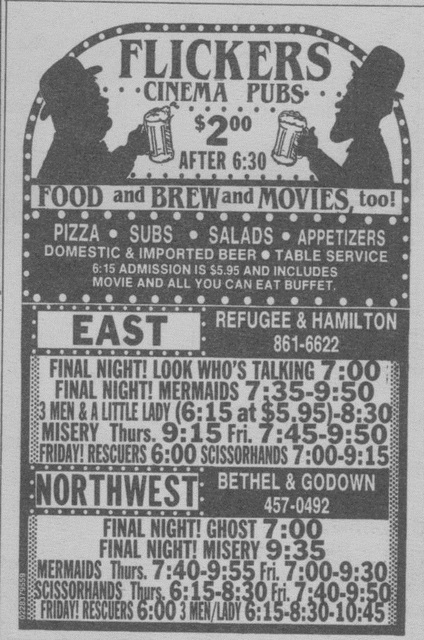 The Forum 1, 2, 3 opened just east of Eastland Mall on March 31, 1972. This first-run triplex with a faux-Roman facade was built and operated by Academy Theatres, which at the time was a local chain of neighborhood second-run theatres.

I believe the Forum 1,2,3 was the first Columbus-area theatre with more than two screens, and possibly the area’s second cinema originally built with more than one screen. (The first was the Bexley 1 & 2, built as a twin way back in 1935.)

The Forum 1, 2, 3 closed some time in the late-1980’s, but reopened on Friday, June 23, 1989 as Flicker’s East Cinema Pub. It was one of three Flicker’s locations in Columbus, serving beer and food along with movies.

Flicker’s East Cinema Pub closed on Sunday, October 22, 1995. The building has sat empty and unused ever since. The Eastland Mall area now has no movie screens at all; ten years ago, it had 19 of them.

Interesting. Any idea why the city would buy it? Does it make sense for them to flip it to a cinema operator (chain or independent)?

According to the County records, the theatre was originally owned by Leo Yassenoff, who owned a number of theatres. The original date was April, 1967. The title passed to his foundation in 1974 and moved to the Columbus Jewish Foundation in 1996. It passed through a number of owners until it was given to the city in 2008 by Syed and Tabinda Rehman.

So what is the city doing with it, and what did the Jewish Foundation use it for?

In early 1984, Royal Theatres, operator of the Forum at the time, announced that they were going to build a 6-screen theatre behind the Forum. It was to seat 2,500 with 2-500 seat rooms. Dolby and 70mm equipment was to be included. This project was never completed.

In a Columbus Eastside-related Facebook group, someone told me that a Pakistani community center called ‘Masjid Namrah’ is now located here.

Mark_L (or anyone else local to Columbus), can you walk or drive by the location and verify this? These pages give the same address as the old Forum, but I don’t know if they moved into the cinema building or if they tore it down to build something new.

The picture on the website of the sign is definitely the one from the old Forum theatres. County records show it is still owned by the City of Columbus, and notes owned by the library system. I’ll keep looking.

In response to Ron Newman’s request, as of 4/15/13, the building is the same but they have changed the portico.

This was THE FORUM when my friends and I went. What I loved about this place was you could catch some classic films and animation. Saw Bakshi’s WIZARDS (1977), KING KONG (1933) and many WB cartoon movies there.

I managed The Forum from Feb 1980 until April 1982. I loved working that theater! It was also the first theater at least in Ohio to have Stadium style seating in all 3 auditoriums. If memory serves me Cinema 1 had 168 seats #2 had 210 seats and #3 had 184 seats. We used a platter system in #2 and reel to reel in the other 2 theaters.

There was another Flickers Cinema at Worthington Square Mall. The cinema is now a little strip with a pizza place and a chinese restaurant in it.