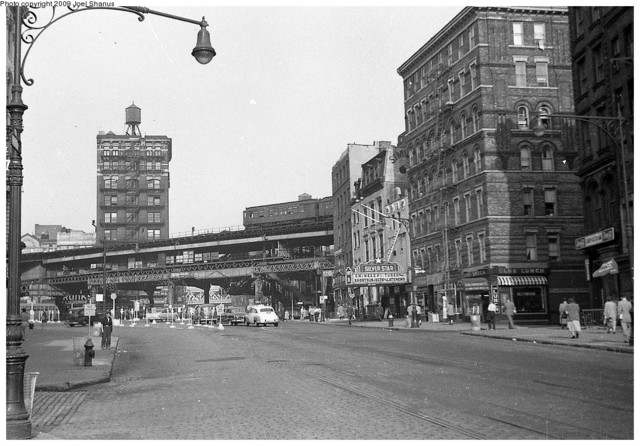 The 1995 hardcover “By the El: The Third Avenue El at Mid-Century” Stelter book referenced by J.F. Lundy was out-of-print (and out-of-price range!) until recently. A softcover second edition, complete with modern updates, has been published and is available for a modest $19.95. The theater shots alone from this book were worth every penny. I was able to secure a copy last December at the NYC Transit Museum Annex store in Grand Central Station. Hopefully, some CTer with access to the book and a scanner can post a pic of the Silver Star atop this page.

[As an aside, should I mention the new Chinese Christmas film sequel to “Crouching Tiger, Hidden Dragon?” is called “Crouching Reindeer, Hidden Log?]

The Film Daily Yearbooks list this as the Park Row in 1945 and the Silver Star in 1946.

Here’s a great photo of the Park Row theater in it’s early days. There’s another theater a few buildings now, but can’t make out the name of it. Anyone know?

Yes, Bway. The one behind it is the Venice.

from frankmondial re 1960s Chinese films in Park Row: Hello. I am Australian-based and very interested especially in comments from jflundy on both the Silver Star and Venice theatres. If I understand you correctly, both theatres were on Park Row and at some time showed Chinese films. From research on the life of Esther Eng, whose “Esther Eng” restaurant was located firstly in upper Manhattan then in Pell Street, Chinatown, in the 1960s – she rented a theatre in “Park Row” (again in the 1960s I think) to show Chinese films. She herself had directed Chinese films in Hong Kong and the US during the 1930s and 1940s as well as, from around 1950, operating 5 restaurants in Manhattan until her death in 1970 – including Bo Bo on Mott Street from 1950. My information suggests she distributed and exhibited Chinese films in a Park Row theatre – perhaps the Silver Star or the Venice? I’d be glad to hear anything that either refutes or confirms the idea of either of those two theatres being the one she rented in the 1960s. Thank you very much.

Chinese films were definitely shown at the Silver Star. In the course of doing some research about my family for an upcoming exhibition at the Museum of Chinese in America (MOCA) in downtown NYC, we confirmed that my grandfather, Harold L. Lee, was an owner of the Silver Star in the 1940’s-1950’s. We have a marble pen and pencil desk set engraved “Given to Harold L. Lee by the NY Chinese Film Exchange”. My uncles worked at the theater, importing Chinese films from Hong Kong and and interpreting them into English for censorship purposes. We also have some letterhead for the Film business. Living relatives remember going to the theater and sitting in the balcony and that the theater, located then at 223 Park Row, was on the present site of 217 Park Row.

The theater, if it existed until the 1960’s was probably torn down to make way for Chatham Green, a high rise coop, first of its kind in Chinatown, which was established in 1962. My grandmother, Harold’s wife, and my aunt and uncle were among the first residents.

I just uploaded a photo of the Park Row, from the NYC Tax Photo collecion, which became available online in Nov. 2018. This picture is from the photos taken between 1939 and 1941.