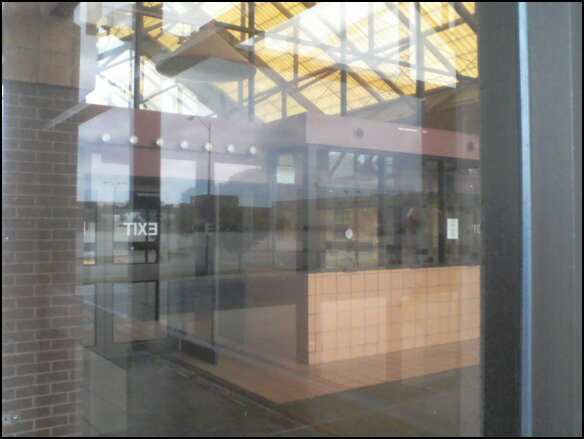 This was an AMC six plex that was located in the Gladstone area off the Arrowhead Trafficway. It was a short distance from two other six-plex theatres. When the Metro North Plaza 6 first opened on June 5, 1987, it played first run attractions, and like the other two six plexes it was closed for some time. AMC closed it in 2000.

It reopened in June 2006, operated by the independent Globe Cinemas company. It was closed in December 2009. It was demolished between 2018-2019.

This one re-opened not too long ago as a discount house.

I went to this theater recently. It costs $2. The projection was poor at best. There was at least 2 inches or more of the movie that was cut off because the screen wasn’t within frame.

They also did not clean up the theater in between movies.

Sunday, December 27, 2009 is the last day that this theatre is opened for business.

I was in school > Choir (required class) and over the intercom they announced that my mom was at the school to pick me up… and it was to meet up with friends from work > go out to eat > and see Bram Stoker’s Dracula (1992)! Sold out showing and I remember it had better lighting/interiors than Dickinson. The seats were also way better than Dickinson’s low ones.

Saw The Fugitive (1993) back-to-back weekends. Recall there was a guy dressed up as the title character for Rocketeer (1991) screening.

Saw Man Without A Face (1994) here and remember this was one of the only theatres that sold ice cream and pizza (Pizza Hut).

AMC’s cg ‘Filmstrip-guy’ surfing around and ‘Silence Is Golden’ before the film.

I do remember it closing and then re-opening as a dollar house. I went to see something there and it was a shell of a movie house. It also had a dusty-cant-do-anything-about-it smell.

This opened as Metro North Plaza 6 on June 5th, 1987. Grand opening ad in the photo section.