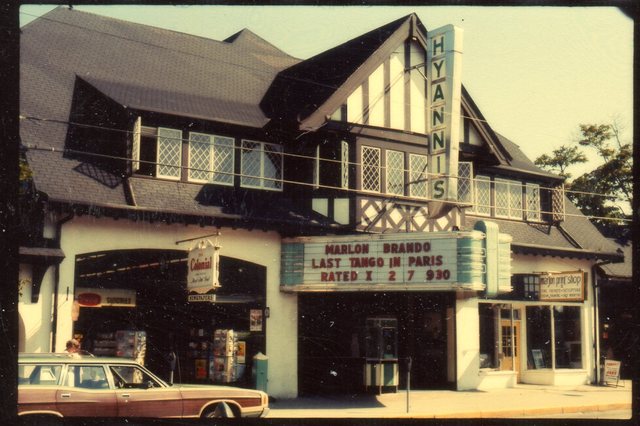 Beautiful Summer theater in the west end of Hyannis (Cape Cod). It is located at the corner of Main Street & Sea Street. At one time it was operated by the Interstate Theatre Corporation.

Doesn’t this still stand as retail, which is contrary to the demolished status above?

The last time I was there the space had been converted into retail and housed a variety of shops but all remains of the theater are gone as the interior of the building had been gutted.

A picture of the Hyannis Theater
View link

The second floor used to be an ice cream parlor. The entrance was on the side. Later is was used as a domitory for Interstate’s summer employees.

I was one of those summer employees and the second floor has private rooms for Interstate’s summer projectionists but only three were from off cape and lived there. George Nelson was there the longest. I had never heard of the space being used as an ice cream parlor.

I also resided there during the early 50’s when I was manager of the Center and later on when I was projectionist at the Hyannis. I remember George when he came and replaced Paul Dion (Motorcycle Man)at the Center.
The Ice cream parlor when much earlier than this.

The theater is not demolished! It is still standing, now with retail on the ground floor. The upper floors are condominiums and my mother is moving into one right now. I am trying to get some memorabilia from the theater for her, but so far, no luck. There are a couple of photos floating around online, but not enough resolution to blow up and frame. But the condo is quite nice and the big wooden beams from the roof are exposed. It is her dream come true!

The theater was gutted long ago. So far the only photo I have seen is the one I posted.

A “Looking Back” feature in the June 27, 2013, issue of The Barnstable Patriot cites an item from the June 28, 1923, issue of the paper saying that the new Hyannis Theatre would open that day. The timing indicates that the Hyannis was probably the theater project mentioned in the April 28, 1923, issue of Exhibitors Herald, which said that a 1,000-seat house was being built for Hyannis Theatre, Inc., from plans by Boston architects J. Williams Beal Sons. The same firm later designed the house now known as The Boston University Theatre.