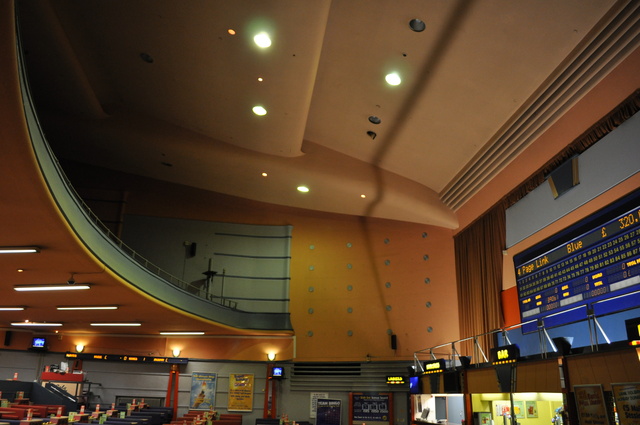 Located in the west London district of Acton. The Dominion Cinema opened on 19th October 1937 with Paul Kelly in “Parole Racket” and Elizabeth Bergner in “Dreaming Lips”. It was a project of the small Bacal & Lee Circuit, and they commissioned Frank Ernest Bromige to build another of his streamlined Art Deco style cinemas.

The exterior has two fin features, each decorated by narrow vertical curved glass windows (now boarded over) and a recessed main façade that is dominated by further curved windows and a pair of small wrought iron balconies. These windows had been boarded over for many years, but have now been opened up again.

Inside the circle foyer had a small café set into a sunken floor feature (recently filled in). The auditorium is in a pure Streamline Moderne style with hidden troughs of concealed lighting.

The Dominion Cinema was taken over by the Granada Circuit in 1946 and it was re-named Granada Theatre. It closed to film use on 24th August 1972 with William Holden in “The Revengers”. It was converted into a Bingo Hall which operated as Gala Bingo Club until its closing on 23rd March 2014. The building was purchased by the Destiny Christian Centre who used the building as a church without applying for change of use planning permission. The church vacated the building in Spring 2016 and it was offered ‘For Sale’ and in 2017 was purchased by a company named Arch who operate indoor ‘rock climbing’ facilities. Plans were approved on 5th July 2018 and the climbing structures do not impinge on the original fabric of the building.

The Granada is a Grade II Listed building.