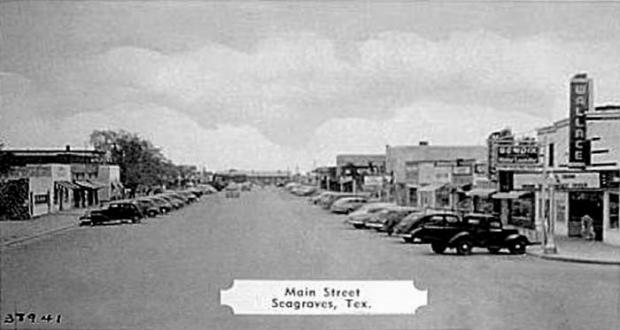 Don’t blink driving through or you will miss this faded little oil town. The Wallace Theater was opened in 1940, and continued until at least 1950. It was owned by the Blankenship brothers and was a sister theater to the Rose Theatre, also located in Seagraves.

I was only in the Wallace Theatee once when there was a fund-raising auction for the local school where my parents taught. The theater in the late forties and early fifties was the Hispanic/Black theater and whites did not go there. The films were usually Mexican comedies and were usually only shown on weekends.

The November 9, 1964 issue of Boxoffice noted the recent opening of a new theater called the Eagle in Seagraves. There were no details about the new house, but the item said the owner was named J. B. Prather.