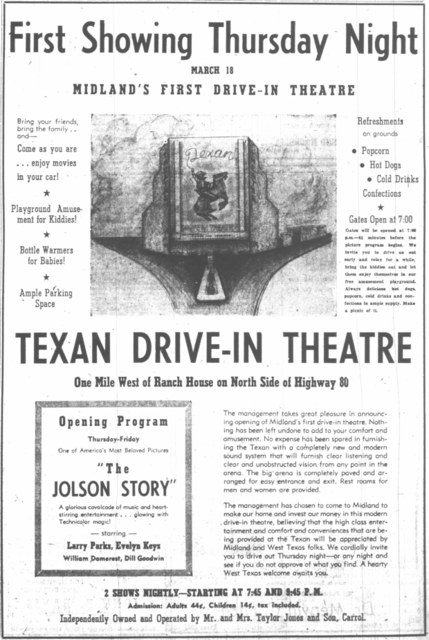 The Texan Drive-In was opened on March 18, 1948 with Larry Parks in “The Jolson Story”.. Today the screen tower is still visible across from the Big Sky Drive-In on W. Highway 80.

Was owned by Video Independent.

Above address does not map properly. Use 5800 West Highway 80. The screen is to the east of the open drive-in & west of Midland Powersports.

I believe the original location was about one mile east where All American Chevrolet is now located.

The Texan held its grand opening on Thursday, March 18, 1948, per an ad in the previous day’s Midland Reporter-Telegram. The opening program was “The Jolson Story.”

It was described as one mile west of Ranch House (which I can’t find) on the north side of Highway 80. That matches a drive-in shown on a 1963 aerial photo at present-day 4200 W Wall St.

Looking at that 1963 aerial, there are no other likely candidates for a drive-in on the north side of 80 between Midland and Odessa. In particular, whatever was later next to the Big Sky was an empty field in that 1963 aerial. A drive-in there was outlined in a 1975 topo map and was visible in a 1995 photo.