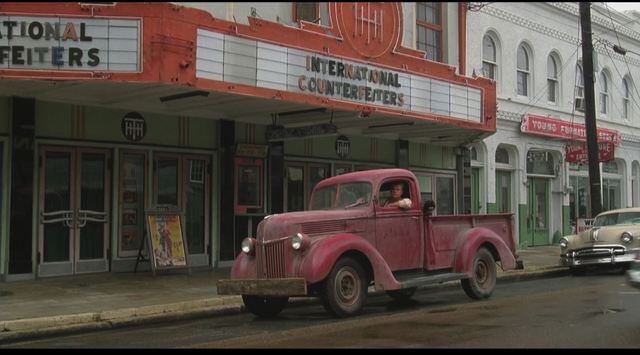 The Happy Hour Theatre opened in 1910 on Magazine Street at St. Andrew Street. In 1945, the Film Daily Yearbook lists it as open with 1,100 seats. The Happy Hour operated until 1983.

Today the building houses a gallery which sells rugs (both modern and antique) and antiques.

I was a tenant for 9 years
The theater was Art Deco
Became Spanish language in late 60's
Closed in 1986
1200 seats, (I counted) with 200 more fold outs
The screen was at the front (as you walk in)and featured a huge speaker behind it , the RCA magic voice of the screen.
Actually opened in 1896 as a Vaudeville Theater
The first in New Orleans to show “Motion Pictures"
Housed Mistrot’s Antiques from 1987-1996
Partially destroyed by a flood in 1995
The only thing left original is the arch around the screen
Dorothy Lamor was discovered there (she worked at the Woolworth’s across the street)
I have some great photos of memorabilia
This theater is not a candidate for restoration.

This is an artists rendering of the Happy Hour Theatre. The correct opening year is 1910, although this pic has a caption saying 1907.
http://www.stpaulsec.org/images/happy_hour.jpg

The June 24, 1944, issue of Boxoffice Magazine ran an article about pioneer New Orleans exhibitor Al Durning, who built the Happy Hour Theatre. Here’s an extract from the article, quoting Durning as he recalled the early days of movie exhibition in the Crescent City:[quote]“During the early part of the 20th century, all kind of moving picture theatres and airdomes sprang up over the city, at one time there being more than a hundred. Many types of projectors were used, the Edison predominating. St. Louis was said to be the only other city which compared as to the number of theatres.

“When I heard about the first real structural theatre built in Denver, I decided then and there to erect a first-class show house. So I promoted a company and we built the first suburban theatre building here and named it the Happy Hour. For years it was the pride and one of the show places of New Orleans. In spite of the competition from downtown nickelodeons, our price was ten cents. However, we packed them in daily and generally used the SRO sign over the weekend.”[/quote]Durning mentions a few of the earlier theaters in New Orleans, and says that during the summer, Charles Rock and Billie Reed would move their Vitascope projector from their theater at Exchange Alley and Canal Street, and set it up in the popular resort of West End on Lake Ponchartrain.

He mentions movies being shown at the old Grand Opera House on Canal Street, primarily a vaudeville theater. He names Messrs Scully and Streetly as the operators of the second motion picture house in the city, located at Canal and Basin, and credits them with starting the first film exchange in town as well. Streetly later opened the first airdome in the city, at Annunciation and Erato.

Charles Pearce then opened a movie house in a remodeled building at 932 Canal Street. This was later remodeled and renamed the Electric Theatre. Unfortunately he doesn’t give the dates these various houses opened, but all of them were in operation before he built the Happy Hour.

Nice pictures,and what a great name.

Just added a 1938 photo. The “Ain’t There (dere) No More – New Orleans” FB page I got it from, had comments that said that author Anne Rice bought it in the `90’s. With intentions of making it into a dinner theatre. It apparently is an Oriental Rug store today. She also supposedly bought a church at Prytania & 3rd Street, which she also sold.

This was our Shop from 1985 until 1994 when the marquee fell after a rainstorm, Angel Heart (1987) was filmed right in front. I will try to post some memorabilia photos.

The theater is also briefly seen (down the street) in the movie Miller’s Crossing.

Wow! What a treat to see the picture of the Happy Hour Theater in NOLA. I worked there when I was in high school for a few years. Losts of memories. Mr David Richarme was the owner with his wife. I help Mr Richarme select the movies to e played. Especially the Spanish.

I grew up going there to watch Spanish films. A lot of great memories there with my mother and bother. Would love to have a picture of it if anyone wishes to sell it.