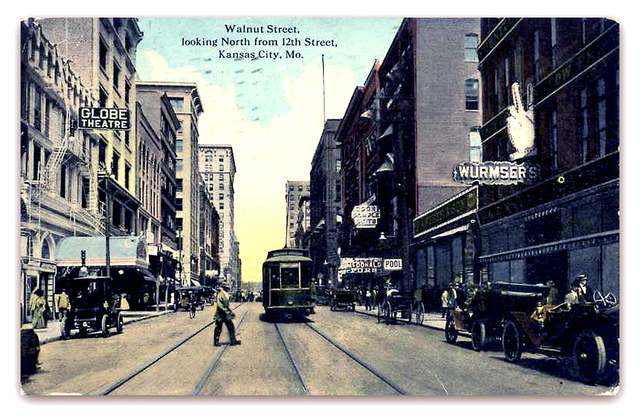 The new Kansas City Repertory Theater will be opening on the former site of the Globe Theater in February of 2007. The new theater building, completed in 2006, is part of the new Power & Light entertainment district.

The second Globe Theater at 1300 Walnut (southwest corner of E. 13th and Walnut) has the distinction of screening the first talking movie in Kansas City. It was constructed in 1913, and demolished in 1932. The site remained a surface parking lot from 1932-2005.

The second Globe Theater was constructed after the first Globe Theater (1112 Walnut between E. 11th and 12th streets) was demolished in 1913 to make way for the Klein’s Department Store. Klein’s closed and was demolished. Commerce Bank Arcade sits on the property today.

The first Globe Theater was located in a building constructed in the 1880s as a firehouse. It was later converted into a cabaret; then the Majestic burlesque and vaudeville theater; was for a time a Pantages vaudeville house; and finally was called the Globe Theater, again a vaudeville venue.

Information and photos about the first Globe Theater can be found here:

While I’ve not been able to find a good photo of the second Globe Theater on the southwest corner of E. 13th and Walnut, I was able to find a photo of downtown Kansas City on the KC Public Library website, where one can see it in the photo.

Here is a photo from the early 1920s looking west along 13th Street. The roof and east facade of the second Globe Theater can be seen directly under the smokestack in the picture, and to the left of the low-rise white brick building with the big, dark windows (the former Jones department store).

Three other theaters are also apparent in the photo. In the lower left is the roof and back facade of the former Garden Theater (one of the Boller Brothers’s first atmospheric theaters); on the right mid-portion of the photo is the east and south facades of the B. Marcus Priteca-designed Pantages Tower Theater (right, below the skeleton of a skyscraper being built); on the middle left edge of the photo is the Rapp & Rapp-designed Mainstreet (Empire) Theater (small, light-colored, domed building). The Mainstreet (Empire) is the only theater in the photo remaining. It is currently undergoing restoration and will reopen as an AMC Theaters all-digital 6-screen boutique cinema.

Here are some references to the Globe Theater from the Kansas City Public Library’s local history database:

The “Vitaphone” Brings Another Important Screen Event Article about the presentation of the “first” talking movie in Kansas City, “Don Juan,” starring John Barrymore, on June 11, 1927, at the Globe Theater.

Article about the demolition of the theater whose “greatest claim to histrionic distinction here [Kansas City] is that the talking movie…was introduced within the Globe walls.”

It is reported that the second Globe Theater did better as a vaudeville house than a movie theater.

Correction. I stated that the former site of the first Globe Theater at 1112 Walnut is now occupied by Commerce Bank Arcade. That is incorrect. Town Pavilion tower nows sits on the site of the former theater.

The April 13, 1913, issue of The Construction News announced the plans for the Globe Theatre, to be built at 13th and Walnut Street in Kansas City. The owners were Oppenstein Bros., and the architects were Jackson & McIlvain.

Jackson & McIlvain are supposed to have designed a theater at Parsons, Kansas, around 1913, but I’ve been unable to track down its name or any other information about it.

This opened on August 31st, 1913. Grnd opening ad in the photo section.