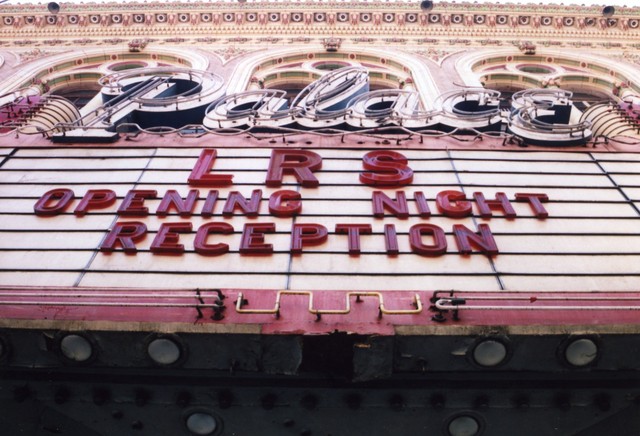 Opened June 6, 1911 as the Orpheum Theatre presenting vaudeville. This was the third Orpheum Theatre to open in downtown Los Angeles, and it is now the oldest surviving building in the USA that was built for the original Orpheum vaudeville circuit. Designed by architect G. Albert Lansburgh, assisted by Robert Brown Young, it is fronted by an office building that has a six story exterior loosely based on a Florentine early piazza, believed to be modelled on the Casino de Municipale in Venice, Italy. Built in brick and concrete, the façade is notable as incorporating the first use in Los Angeles of polychrome terra cotta as a decorative medium, here depicting multi-coloured swags, flowers, fairies and theatrical masks. At first floor level four panels depicting Song, Dance, Music and Drama - the muses of vaudeville - were sculptured by Domingo Mora, father of Joseph Mora who sculptured figures on the nearby Million Dollar Theatre. The name ‘Orpheum’ was sculptured into the stonework above the entrance.

Inside the auditorium, seating is provided on orchestra, balcony and, unusual for a normally tolerant Los Angeles, there was a second balcony with its own separate entrance that was for the use of African-American patrons only. The balconies are supported by slender posts, and when first opened there were four pairs of boxes on the side walls next to the proscenium. The decorative style of the auditorium is French Renaissance, and has remained unaltered over the years, apart from the removal of the boxes when it became a full-time cinema in the 1930’s. In their place are two large framed oil paintings by Anthony Heinsbergen in a French style. A Smith 2 manual 16 rank organ was installed at this time, and the second balcony was opened up to the general public in the 1930’s, but it has not been in use in later years. The ‘modern’ style neon lit marquee was another 1930’s addition to the Orpheum Theatre.

The Orpheum Theatre attracted many stars to appear on its stage, including: W.C. Fields, Sarah Bernhardt, Will Rodgers and Harry Houdini, as well as some of the greatest animal acts in vaudeville. When the new Orpheum Theatre was built further along S. Broadway in 1926, this theatre struggled along for a few years as a second house, known as the Orpheum-Palace Theatre. After conversion to movies it was operated for a time in the early-1940’s by Sol Lesser’s Principal Theaters Corp. of America as the Palace Newsreel Theatre. By 1943 it was known as the New Palace Theatre. It was renamed Palace Theatre on January 24, 1947.

Taken over by Metropolitan Theatres on August 13, 1978 it began screening Spanish language movies. It was occasionally used for film shoots which included “The Frank Sinatra Story” (a TV movie), the Bette Midler version of “Gypsy” and Steven Seagal in “The Glimmer Man”. It played out its final years as a movie theatre showing general release films with Spanish sub-titles until it was closed in late-2000. It was the last operating cinema in the downtown area, and the original silent movie screen still hung in the stage fly-tower. The fate of the Smith organ is unknown.

The Palace Theatre was then open for special events and all sorts of location filming. It was seen in the movie “Dreamgirls”(2006). Currently, this theatre is one of four theatres owned by the Broadway Theatre Group, which was founded in 2007 to manage, restore, and preserve the historic theatres of Broadway. In 2010, work began on a $1 million restoration, and the Palace Theatre reopened in June 2011 as a live show venue, with occasional film screenings. As of 2016, the Broadway Theatre Group managed the Tower Theatre, Palace Theatre, Los Angeles Theatre and the State Theatre, and have done significant restoration as well as new lighting and electric systems for all four theatres. The restoration is ongoing. The Tower Theatre, Palace Theatre and Los Angeles Theatre are currently rented out for performing arts, live music, film shoots and private events (and occasional movies at the Palace Theatre and Los Angeles Theatre) while the State Theatre was leased to the Cathedral of Faith Church (United Church of the Kingdom of God) until December 2017 when they vacated the building.

The Palace Theatre is listed on the National Register of Historic Places.

dickneeds111: The Palace is the oldest surviving theater built for the Orpheum Vaudeville circuit. The description could use clarification on that point as there had been quite a few theaters called the Orpheum before the circuit was launched from the Orpheum Theatre in San Francisco, which was opened by Gustav Walter in 1886. Most of those other Orpheums, like the one in Boston, were never part of the Orpheum circuit or its successors, KAO (Keith-Albee-Orpheum) and RKO (Radio-Keith-Orpheum.)

The following is an excerpt from an article in the June 27, 2011 issue of the Los Angeles Times:

“When the [Palace] theater opened, the upper "gallery” level was earmarked for non-white theatergoers. Reportedly designated “Negroes Only,” it featured bench seating, had separate restrooms and could be reached only through an outside entrance. Historians have noted that such an arrangement was unusual in a city that, in those days, was more tolerant than other places.

The Mason Opera House on Broadway had a separate entrance on Hill Street to a gallery seating people of color. I believe the Morosco (Globe) Theatre also had a segregated gallery with an entrance from the alley.

It was while rushing to her 1913 engagement at the Palace (then Orpheum) that Sarah Bernhardt’s taxi driver got in the accident at Washington and Crenshaw which later caused Ms Bernhardt to lose her leg. Story here: http://articles.latimes.com/2010/oct/23/local/la-me-1024-then-20101023

Watch What Happens Live with Andy Cohen just completed a week’s worth of shows at this theater. Looking good…

The Palace Theatre is seen in the Music video for “Havana” by Camila Cabello.

A day early but, Happy 108th Birthday Palace Theatre, the first Orpheum Theatre built is still with us! A milestone for sure.

I am kind of shocked that there is no mention of Michael Jacksons “Thriller” in any of the comments or overview for the Palace. Especially since the video is over 35 years old now Close to 800 million views for “Thriller ” on YouTube alone could quite possibly make the PALACE the most famous theaters of all time