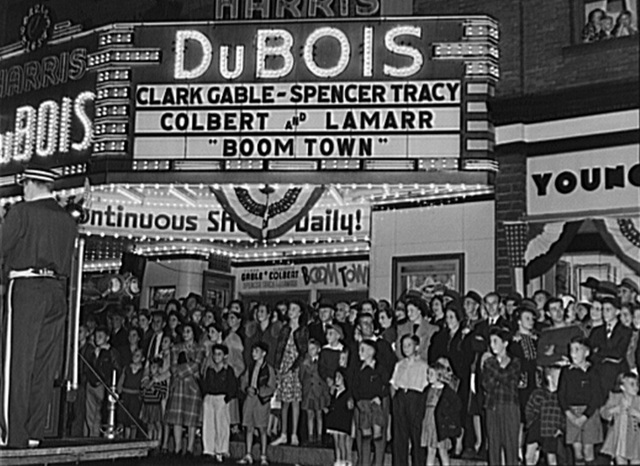 The Harris-Dubois Theatre was opened October 27, 1937. It was later renamed General Pershing Theatre. On May 28, 1968 it was renamed Dubois Playhouse. It was closed in December 1988.

According to Cinema Tours there was the Avenue Theatre in DuBois PA, but from the photo it looks to pre-date the DuBois Theatre.

Here is a July 1946 ad from the DuBois Courier-Express:
http://tinyurl.com/23q9ht

I would like to note that the picture posted by Bryan in 2005, and ad posted by ken mc in 2007, are of the “Harris Theatre”. Du Bois had three theatres, the Avenue, the Harris and the Carlton.

Here is a fresh link to the photo of the Harris DuBois Theatre in Boxoffice, October 15, 1938.

A post by user Foxfan on this page at a DuBois community forum says that this house was called the Pershing Theatre for a while before being renamed the Playhouse. The post also has some information about other theaters that have operated in DuBois.

There was another Elks Theater on Brady Street in Du Bois. I have a 1926 post card image. I will add it to CT when I can find more info on it.

Linkrot repair: The Pittsburgh Plate Glass Company ad illustrated with a photo of the front of the Harris DuBois Theatre, in Boxoffice of October 15, 1938, can now be found at this link.

Did this theater ever go by the name Pershing in the mid 1960s?

The DuBois Theatre was added to the venerable Commercial Hotel building in 1937. At some point the hostelry was renamed the General Pershing Hotel, and it appears that the theater shared the new name briefly before being renamed the Playhouse. So far nothing (ads, newspaper articles) has surface showing the Pershing Theatre name, so we don’t know the exact period when the name was used.