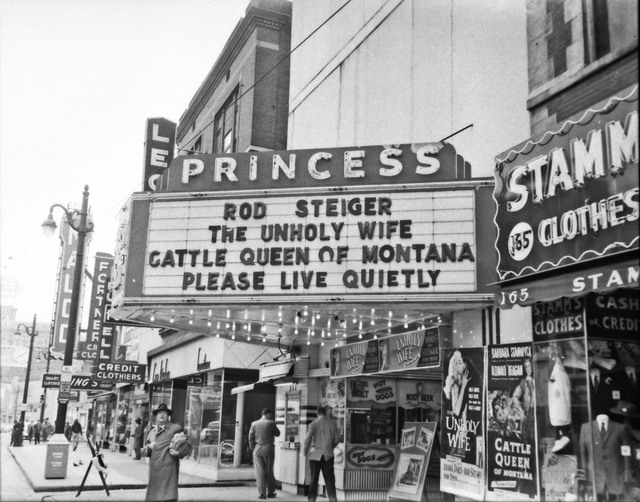 The Princess Theater opened on August 5, 1912 with vaudeville & moving pictures. It was operated by Southern Enterprises, and was equipped with a Kimball pipe organ. It was the most elaborate of the stud-lit free standing theatres. It was also the only one which used the spelling ‘theater’ militantly, even in the terra cotta. Not long after it opened, the deep entryway with its barrel vault became a mixed blessing. It sprouted several different canopies and an outdoor concession stand which actually kept the theatre viable in later years when it had acquired a bad reputation and a worse smell.

Loew’s rented it for a time, Paramount rented it also. Malco operated it and Kemmons Wilson (of Holiday Inn fame) owned the building.

The theater was later acquired by the Shelby Amusement Company and closed in 1969 and demolished shortly thereafter. In its last years the elaborate terra cotta façade had been covered or destroyed. Some interior plasterwork remained, but the smell did not abate until it was completely gone.

According to Bowers' “Encyclopedia of Automatic Musical Instruments” page 551, there was a Reproduco organ made by the Operators Piano Co. installed at the Princess at one time.

There was a photo of the concession stand in Boxoffice, June 1960:
http://tinyurl.com/ycbewra

this theater was still in business when i was a boy of 11 or 12.this would have been in 1967 or so.in those days it was still safe and accepted for kids to ride the bus downtown and see movies at the malco,loews state etc…however we were warned not to go to movies at the princess as that was where the perverts hung out.i have no idea if that reputation was warranted or not.

The Princess probably had that reputation because it stank. It had a men’s room but it was easier to use the storm drain in the alley on the south side. The Princess was legendary because of that and convenient because the concession stand was outdoors. It stank even after it closed, inside and out, and during demolition. I remember hearing from people I knew that it was a “colored theatre” on Main St. It had some upper levels because my father bought some of the fire escape stairs for a project of his. Also some of the balcony rails from Loew’s State. That’s how I got my mementos from the State and a glimpse of the ruins of the Princess. BTW, Mary Pearcy was shot in the boxoffice of the Malco in late 1971, just before “Hair” reopened the stage in January 1972. It was an attempted robbery. After that, the bulletproof glass was installed which remains today. Malco did not use the window facing Main ever again. I was at the theatre before and after and I will never forget that night.

My wife and I were in the theater watching ‘Dirty Harry’ the night Mary Pearcy was shot at the Malco. Policemen everywhere and we could not exit through the front. Had to find out what happened on the news.

There is additional information about and pictures of the Princess on this webpage.

There is reference to the Princess having a Kimball organ. In David Bowers “Encyclopedia of Automated Musical Instruments” p. 551 is a reference to the installation of a Reproduco organ (probably a photoplayer) at the Princess. There is no date: maybe it preceded the Kimball.

As far as I know, the Princess didn’t bother with an ad in the newspapers after March or so, 1966. But, as mentioned above, I think it continued to operate until early in 1969.