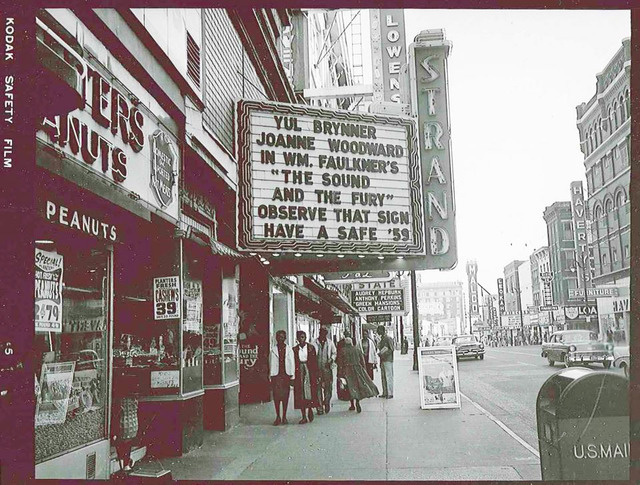 This theatre began life as Frank Montgomery’s Majestic #2 in 1913. The huge canopy sheltered the both tiny lobby entrance and one of the commercial store fronts. It became the Strand Theatre in 1929, and the second marquee was only the width of the entry. A third marquee of the triangular variety was its most familiar. It was operated by Loew’s, Malco (for Paramount Pictures Inc. though their subsidiary M.A. Lightman) by the early-1940’s, and later independently.

Just noticed from the maps and street numbers that it must have been just North, not South, of Loew’s State. Sorry, it’s been a long time…

WHW excellent description! Thanks. In my (limited) research on Memphis theatres I’ve come across several references to the Majestic #1 and #2 and also the NEW Majestic #1 and #2. I infer there were actually 4 theatres called Majestic at one time. I’ve wondered if the building last known as the Strand was one of these. There is a Majestic theatre still standing nearly across from where the Strand stood. It is now a brew-pub. It was adjacent to the Hotel Gayoso and Goldsmiths.

My best recollection is that the Strand was always called the Strand, from 1963 to 67 at least; and a newspaper article about 1966 when it closed briefly said (I think) that it had been so named since the 20s. There may have been one or more Majestics in Memphis before my time, but I don’t remember hearing about them. The first Majestic I saw was in San Antonio, Texas (q.v.) and it sure was. Fortunately it escaped the wrecking ball and was restored.
Google lists a Malco Majestic at 7051 Malco Crossing way out to the Southeast near Winchester and Route 385 (Nonconnah Parkway), but that’s clearly a newer one…

Everything I’ve heard about the Strand was exactly as you describe. The “era-of-four-Majestics” would have been around World War One, which made me think that the Strand MIGHT have been one of the later Majestics, renamed in the 1920’s.

By the time I was in Memphis, the Strand’s site had been a parking lot for years. It was interesting (and a little heartbreaking) to be able to see the scars the old theatre had left on the adjacent building: you could clearly see where the stairs and balcony had been.

The Film Daily year book for 1935 lists this as Loew’s Strand. The big theatres in downtown Memphis changed hands a good deal during the ‘30’s. Loew’s Palace went to Paramount for a while and then to MALCO. Apparently Lowe’s operated the Strand right next door to their magnificent State for a while. Loew’s got the Palace back around 1940 when MALCO got the RKO Orpheum. As an old theatre manager friend said of that time: “the employees in the downtown theatres didn’t know who they were working for from day to day.”

Vincent, thanks for the confirmation on the name Majestic. There is a photo of one of Memphis' Majestics (not the one still standing) in the book Nickelodeon Theatres and Their Music. Wonder if it was this one?

How do I see this photo? The library’s photo of the Majestic/Strand building has a big 10c over an arched marquee. You can plainly see the top cartouche which appears in other photos of the Strand. However, there is another older photo showing a vertical with a starburst over it that says “Majestic” which seems to pre-date both of the other buildings. Which one is it?

I spent many a happy hour at the Strand from 1949 hrough its closing in th 1960s. It was a pie saped auditorium with the biggest wedge toward the rear. The lobby was very small and red velvet curtains separated the lobby from the theatre. They showed a lot of “B' pictures and things lke MY FRIEND IRMA premiered in Memphis at that venue (Paramount, 1949). I recall it came up in status durng the 1950s and it was the theatre were such films as 1959s THE BEST OF EVERYTHING(20th) with an all-star cast (Joan Crawford, Hope Lange, Brian Aherne, Stephen Boyd, Suzy Parker) played for several months. In the 30s they used to have door prizes and give away small appliances and dishes between shows. It was certainly not one of the grand venues like the Orpheum or the 2 Loews properties but it held its own for many years.

There is a photo of one of the Majestic Theatres in Memphis on this page of The Moving Picture World for April 8, 1922. It is a close shot showing from the soffit of the canopy down to the patterned floor. I don’t know if there’s enough there to tell which Majestic it was, so I’m linking it here as this house might have had the name around 1922.