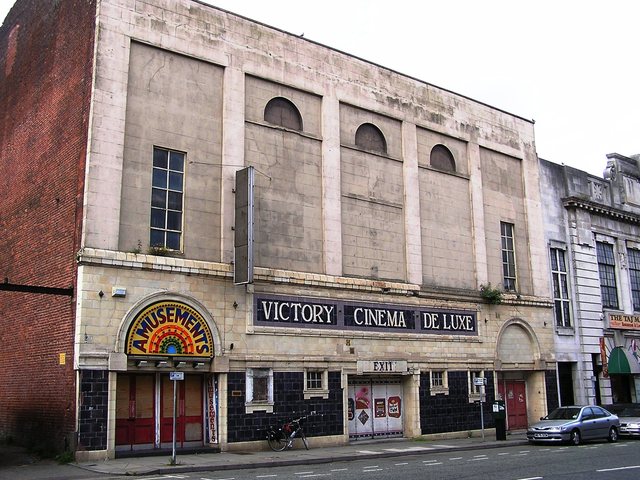 This theatre opened as the New Adelphi Music Hall 1875, designed by T. Crossley. It went through several names - Princes Theatre (1880), Gaiety Theatre (1881), Hippodrome Theatre (1906) until 1919 when it closed and was extensively altered inside and out to reopen at the Victory Cinema De Luxe in 1920.

The theatre had a range of side and rear private boxes, pit and at least one balcony, probably two. These were swept away by the 1919 alterations (to the designs of Messrs Roberts and Taylor) and replaced a single balcony auditorium. Outside the ground floor level to Union Street was completely altered and faced with glazed tiling in a rich cream and purple colour scheme. The upper levels were more or less left intact. In September 1929 it was equipped with a British Talking Pictures(BTP) sound system, and Al Jolson in “The Singing Fool” was the first ‘talkie’ to be screened at the Victory Cinema De Luxe. In the early-1930’s it was taken over by the H.D. Moorhouse Circuit.

In the mid-1950’s it was equipped with CinemaScope and the proscenium was 23ft wide. A British Acoustic(BA) sound system was installed. In the late-1950’s it was taken over by the Brennon Cinemas circuit. In 1962 it was taken over by an independent operator and was re-named Continental Cinema. By 1963 it had closed to films and was operating as a bingo club & casino. In the early-1970’s the bingo club closed and it reopened as a cinema, screening Bollywood films. This in turn closed in 1974. Finally the foyer area only became an amusement arcade which closed in 2004.

Pictures at HERE
and
HERE