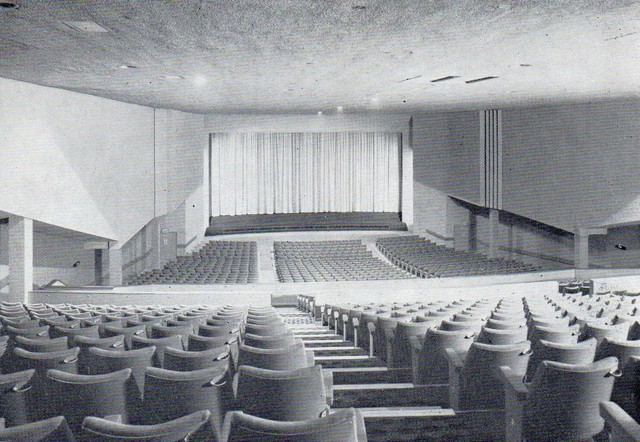 The Odeon was built as a replacement to the demolished Regal Cinema/Odeon Stockton of 1935 vintage. It was built on the same site as the previous cinema and had an interior design by Anthony Sharp. Seating was all on one level (stadium style) with no overhanging balcony. It was equipped with 70mm & 35mm Victoria 8 projectors and the screen was 57ft wide and 26ft high.

It opened on 25th April 1968 with Julie Andrews in “Thoroughly Modern Millie”, and closed on 24th October 1981. After several years not being used it was converted into The Mall disco from spring of 1987, then Visage and from 2000 it was known as the Zanzibar nightclub. In 2013 it was known as ‘GLAM’, which had closed suddenly on 15th June 2013. It was demolished in June 2020.

An exterior photograph of the ‘new’ Odeon Stockton-on-Tees taken in early 1969:
View link

The Odeon opened with Julie Andrews in “Thoroughly Modern Millie” so the first photo I posted above is from around May 1968 during it’s ‘Roadshow’ presentation here and not ‘early 1969’ when that film went on Odeon general release. The cinema was equipped with 70mm projection facilities.

As “Fanatical about Odeon”, I have posted pictures of the 1968 Odeon, interior and exterior, and a ticket to the opening performance, on Flickr. I have good memories from my time spent there as Assistant/Relief Manager from 1969 to 1971. A lovely cinema with a loyal staff and in the friendliest town I’ve ever worked in. The Odeon long gone, a motorway built right through the town, the railway station replaced by a “bus shelter” halt…such decimation is a dreadful shame and, in the current economic climate, Stockton-on-Tees is a mere shadow of its former self.

I worked as a Trainee Projectionist from 1955 until 1964 when I went to London as a trainee manager and eventually in the West End as manager.My Managers at Stockton were Mr. Bernard Goldthorpe, and Ken Williams, There was a very busy restaurant which was never replaced when the theatre was rebuilt.Anyone know what the building is now since the Night Club closed.

ondonstation, The building was purchased by Stockton council when the Glam nightclub closed and has remained empty since. When the cinema opened as The Mall nightclub the new owners made the building look very attractive with the frount all in black with silver lettering, but sadly as the club was sold on to various owners it started to deitireate and when It opened as Glam they even lowered the frount of the building which was only false cladding as the frount foyer was only a single storey building with the cinema behind which now leaves the building a bit of an ugly eyesaw.

The 1968 Odeon had to be somewhat lightweight as the Regal/Odeon it replaced had begun to sink during deep excavations next door when the sorting office behind Stockton’s main Post Office was being enlarged. This accounts for the single storey nature of most of the building – extensive though its footprint remained.

With a licenced bar, cloakroom and twin-window advance booking office, the facilities were very good. Despite its large screen, even the 70mm. image could appear relatively small from the most expensive seats in the raised area we called the circle but which, in fact, was a very long way from the screen.

When on exclusive runs with product like “Oliver!”, “Funny Girl”, “Battle of Britain” “Hello Dolly!” and revivals of films like “The King and I” and “King of Kings”, the Odeon could be very profitable but when sharing the general Rank release with Odeons in Darlington, Middlesbrough and West Hartlepool, it took a very special film, like the Bonds and “Butch Cassidy and the Sundance Kid” for us to make much profit.

Hindsight is wonderful but perhaps this was not the right location for a roadshow cinema especially at a time when big, potentially long-running films best suited to the policy were rapidly declining in number.

Bernard Goldthorpe was a lovely man and an enterprising manager of both old and new Odeons in Stockton. His enforced absence from his beloved cinema due to ill health in 1970 effectively gave me my first cinema as full-time manager and I still have cherished memories of my time running the Odeon in such a friendly town.

The “new” Odeon was constructed for what the industry saw as a very low cost for the time (£120,000 I believe) and at least part of the expense was affrayed by the Post Office having to make substantial compensatory payments when the old theatre had to be demolished.

I remember seeing ‘Cromwell’ at Stockton’s fine new Odeon in 1971. What a short life it had! At least, however, one of the fine cinemas on the High Street is undergoing restoration (ABC Globe). No doubt the opening will be further delayed owing to the present ‘Covid 19’ situation whilst the restoration costs are £26.5 million and counting…..