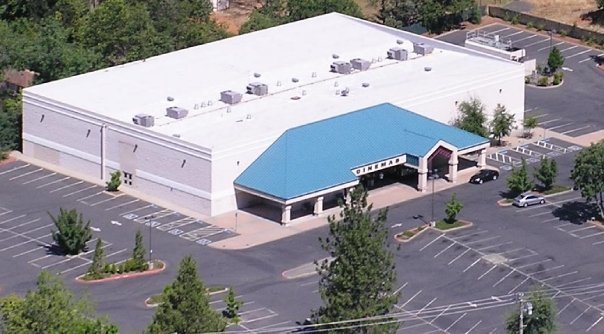 Paradise Cinema 7 is a boxy, free-standing building of rough-textured, light brown concrete blocks, somewhat relieved by the addition along the front of a portico with a green metal mansard. The theatres have stadium seating and are equipped for Dolby Digital and DTS Digital sound.

It sits behind a large parking lot, and in lieu of a marquee on the building itself, it has only a small, street-side sign, just large enough to display the names of eight or nine movies. Due to local design regulations, the theatre has none of the flashy style which is characteristic of multiplexes built about the same time (circa 2000) in other cities.

The Paradise Cinema 7 was ‘smoke’ damaged by wildfires on November 8, 2018 in which almost most of the town of Paradise was virtually destroyed. It was still closed in September 2020.

It hasn’t reopened. While some neighborhoods above Paradise survived the fire, as well as scattered houses in the town itself, and some people have moved back in, the current population is insufficient to support a movie theater. A regional supermarket chain reopened its store that is not far from the theater on December 28, but I don’t know how much business they are doing. Extensive reconstruction, if it takes place, will have to wait until the removal of debris is done, and that won’t be compete until much later this year.

The theeater’s web site still says “Visit our sister theatre at Lakeportcinema.com” and “Visit our drive-in theatre in Lakeport California.” Google Maps updated their satellite view not long after the fire, and very little reconstruction has been done since then, so if you look at and see the devastation you can see how unlikely it is that this theater will be able to reopen anytime soon. The town is still pretty close to empty, and it’s likely to be years before re-habitation sufficient to support a theater will take place, even with some people living in temporary housing, such as RVs, on their burned-out lots.

The website for this theatre says to go to the websites for their sister cinema(Lakeport Cinema) and Lakeport Drive-in. both in Lakeport, California.

Any updates on this theater? How is the infrastructure rebuilding in town coming along? Power, water, and sewer restored yet?

PG&E had power restored to most standing structures within just a few weeks of the fire. Other overhead utilities (telephone, cable) were also quickly restored. Water was a bit more of a problem as the system was already old and in need of constant repair, and many surviving pipes were contaminated by the fire. Most of the system serving structures that survived and new builds has now been restored, but some dead-end streets with no surviving structures or new builds remain to be repaired.

The town never had a sewer system, and was the largest community without one in the United States. A sewer system to serve primarily the main commercial corridors was in the preliminary planning stage at the time of the fire (and had been for years) and there are now plans to go through with that project if it can be financed. But rebuilding is proceeding very slowly, and as of April 6 this year only 81 houses had been rebuilt, though 883 additional permits had been issued. At the current pace it would probably take eight to ten years to replace the 8000 units lost in the fire, but I doubt that pace will continue. The burst was mostly the result of the fact that insurance companies will cover loss of use for only three years if you are rebuilding, and only two if you aren’t. A lot of the housing was not insured, and once everybody insured who intends to rebuild has done so the pace of rebuilding is bound to slow down.

The problem is that the town has lost its economic foundation, which was primarily pension and investment money. Over the decades a lot of retired people moved there because housing was cheap and the town was picturesque, and now both of those features are gone. It will be difficult to attract more retired people to replace those who are not returning, and with a smaller retired population there will be less economic activity to support working people. The hospital, for example, was the largest employer in the town, with over 1000 employees, but now that its patients are gone it is unneeded, and unlikely to fully reopen anytime soon. The school district was the next largest employer, but without the workers at the hospital and other businesses that lost their customers there are far fewer kids in town, and thus fewer teachers and other school personnel are needed.

To some extent the town was also a bedroom community for commuters from Chico and Oroville, but those commuters were attracted for the same reason the retirees had been— picturesqueness, relatively inexpensive housing, and a decent amount of goods and services available locally thanks to the spending of all those retired people, plus the economic multiplier effects of the employees of those goods and service suppliers themselves. So the place isn’t even as attractive as a bedroom community as it once was. The likely result of all this is that it will not be fully rebuilt anytime soon, unless somebody there can come up with a replacement for all that retirement income that was its economic foundation, and that too seems very unlikely. The owners of this theater would have been better off if the place had burned, assuming they were insured. They could have used their capital to build a theater somewhere else. Now they are probably stuck with a white elephant that might not be economically viable for a decade or more, and might never become viable again.

I guess the theater owners must have thrown in the towel. Google now lists it as “permanently closed”.

Have the current bushfires in California had any effect further effect on the town of Paradise or this theatre building?

The North Complex fires which began in August eventually led to Paradise being placed under an evacuation warning for about two weeks, but the fire never advanced far enough to reach the town, and the warning was never upgraded to an evacuation order.