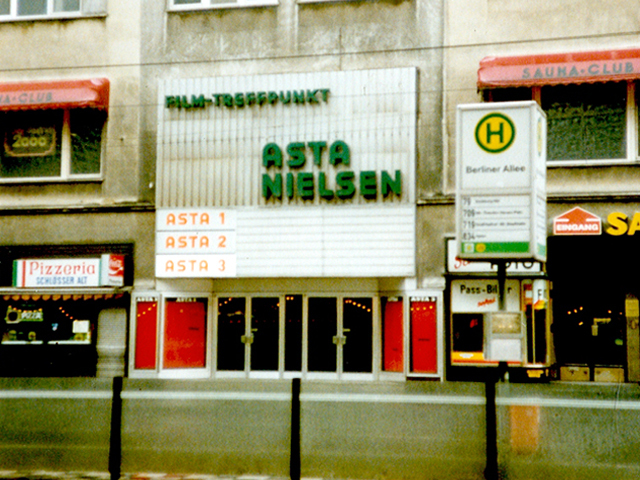 A three-screen-center that played action movies, thrillers and sexploitation titles. It opened as one-house-theatre on the 18th November 1911 (first feature was Asta Nielsen’s “Der Fremde Vogel”, the theatre had an own orchestra directed by “Kapellmeister” Rudi Kessler). During WWII, the Asta was one out of two theatres in Dusseldorf that were not destroyed by bombs. In 1945 it became the Garrison Cinema for the British troops.

The Asta was demolished and rebuilt in 1950 (unfortunately too much sand was used for the concrete which was one of the reasons for the end of the cinema).

25 years later the new owner Dr. Adolf Schoofs divided the auditorium into three and gave the frontage a new look. Asta 1 had now 237 seats, Asta 2 149 and the Piccadilly, later Asta 3, 94 seats and mirror projection. The frontage had a great neon sign with lines that wandered from left to right in the evening. The marbled entrance hall with the box office was very nice and offered also a slot machine (car race).

The two bigger theatres showed titles like “Cruising”, “Exterminator”, “Death Wish 3”, or “Cobra”. The Piccadilly was famous for soft sex titles as “Gwendoline”, Russ Meyers “Supervixens”, and “Emmanuelle 4”. Thanks to the increasing video business the admissions (mainly male loners) went down year by year.

The Asta was closed on 31st December 1986. The last three movies screened were “Instant Justice”, “The Vindicator” (Pam Greer) and the sex oldie “He and She”. The whole building was demolished three months later.

The appreciation site for the Asta Nielsen cinema:
http://www.astanielsen.net