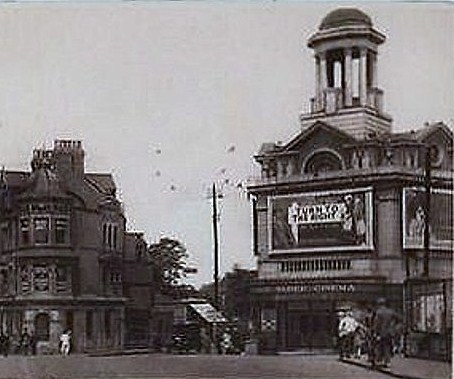 The Ilford Super Cinema was located on the corner of Ley Street and Balfour Road, opposite Ilford Railway Station, in the centre of Ilford. It opened on 14th October 1922, a project of Premier Super Cinemas Ltd.

Architect William E. Trent was responsible for the overall design and Val Prince created the interior decoration. It was the main cinema in Ilford at that time and offered film and variety performances. It was taken over by Provincial Cinematograph Theatres (PCT) in 1924 and that circuit was taken over by Gaumont British Cinemas in 1929.

In the 1930’s it was equipped with a Compton 3Manual/8Ranks organ. It also had a sumptuous restaurant which was very popular.

In February 1945 a German V2 rocket struck nearby and damaged the rear of the cinema, bringing the roof in. It was lunchtime and the Super was just opening up for business on that day so only a few patrons had been admitted. The blast killed two usherettes and injured two more.

The building was declared unsafe and was boarded up. It remained in this deteriating condition for 14 years until it was finally demolished in 1959 and a C & A department store was built on the site.

A couple of us kids used to climb into the ruins of the Super, around 56/57. Great, but spooky and unsafe place to play. The front end, foyer area, was intact, but dark and scary (for a 10 yo, anyway), but the back end at the stage was a ruin with superstructure hanging down precariously. There was some kind of heating passages under where the seating was, because we used crawl through them. I never knew until reading this that it was a V2. I just thought it was an ordinary bomb. That is history, for sure.
I just also read that the Hippodrome at Ilford Broadway was also ruined by a V2, but a month earlier. How many did they throw at us for two of them to hit so close – must only have been a quarter mile or so.