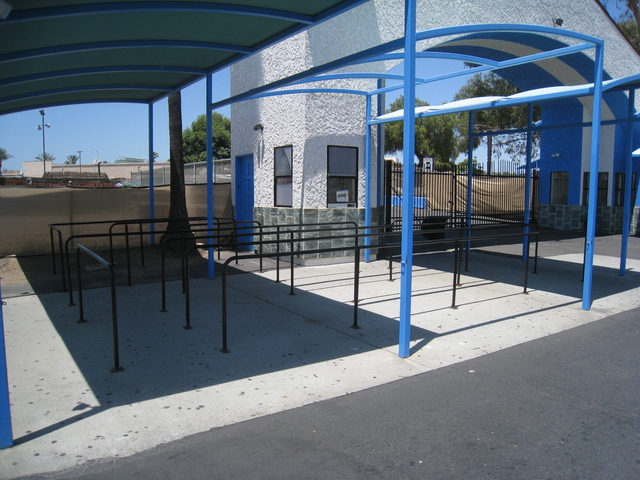 The original Escondido Drive-In was moved to this new location in 1967. This drive-in closed on September 8, 1985 with Clu Gulager in “Return of the Living Dead”.

Here are some links:

It looks like they have swap meets on the grounds now:
http://swapmeet.org/

Sad News: I received a call from a city planner and the owner of the Escondido Drive In (now swap meet) has filed for a permit to demolish the screen because of cost to maintain. The Escondido Drive In first opened in 1951 at 337 W Grant (now Mission) sometime after that it relocated to its current location and the screen was rebuilt. Since the screen does not meet the historic requirements the permit will be granted.
I will photo document the screen before its demise and donate the photo’s to the Pioneer Room. http://www.library.escondido.org/pioneer

Opened in 1956, according to this great new article in the San Diego Union-Tribune: View link

This is the second and final location of the Escondido Drive-In. Here’s an excerpt from an article in the Union Tribune about it:

“The Escondido Drive-In opened July 6, 1950, at its original location at 755 West Mission Avenue. The price of admission for that night’s feature, “The Boy from Indiana,” was 50 cents. The drive-in could accommodate about 320 cars.

California political hopeful and former President Richard Nixon made a campaign stop at the drive-in that year, and in 1962, a local pastor began holding Sunday worship services in the lot.

Films such as 1959’s “Ben Hur” sold out several times a night. Dan Johnston moved the drive-in to 635 West Mission Avenue in 1967 to accommodate the thriving business."

Closed on 8/9/1985 with “Return of the living dead”. Demolished(date unknown?). Site is now a Marshalls Department Store and a Wherehouse Record Store.