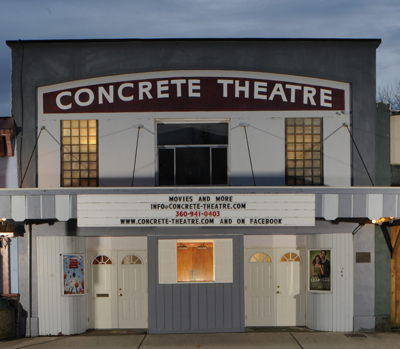 The Concrete Theatre originally opened in its current location, 45920 Main Street in Concrete, WA, in 1923, after two previous buildings that housed the theatre burned to the ground. Seating was provided for 300. Its past has been colorful, with the screen featuring silent films and ‘talkies’, and its stage hosting boxing matches, school and church performances, live music and amateur theatre.

New owners of the Concrete Theatre, Valerie Stafford and Fred West, purchased the building in 2009, refurbished it, and reopened the venue on February 12, 2010. Movies, (primarily second-run) are screened every weekend, and a variety of special performances and live concerts take the stage on a regular basis. The building is also the home of Encore Fitness, with group exercise classes taught on the dance floor.

The town of Concrete caught the attention of movie-goers everywhere when the movie “This Boy’s Life” starring Robert De Nero, Leonardo DiCaprio and Ellen Barkin was filmed there in the late-1990’s. Tobias Wolff, author of the book by the same name, lived in Concrete as a teenager.

I had posted some history about the theater in the original listing of this theater, but it is gone. Is there anyway to get that back?

The blackjack movie “21” was shown in May, so status should be open.

Here is some historical background:
http://tinyurl.com/dcftrz

The Concrete Theatre was purchased by Fred West and Valerie Stafford in September 2009. New website: http://www.concrete-theatre.com

Its kind of funny the the Concrete Theatre could have burned down twice.

We are set to reopen the Concrete Theatre on Friday, February 12, 2010, with movies playing Fridays, Saturdays and Sundays. The facility has been refurbished (new carpet, paint, lighting, curtains, etc.) and a surround sound system has been installed. Looking forward to making magic happen on Main Street again, and hope the community supports us in this effort.

For more information on the Concrete Theatre: www.facebook.com/concretetheatre, www.concrete-theatre.com, or We welcome your ideas, suggestions and feedback.

Didn’t see any pictures of the projection booth, the new sound system, or the stage/screen.

Who did the sound system install, McRae Theatre Equipment?

Sounds cool! Interesting-looking theatre, at least from the back, too.