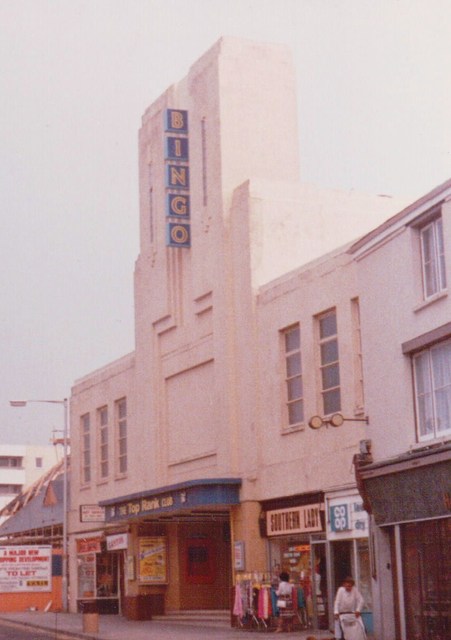 Built for the London & Southern Super Cinemas Ltd, chain, the Ambassador Cinema opened on 8th March 1937 with Tom Walls in “Dishonour Bright”. Well known British film star Will Hay made a personal appearance at the opening.

The Ambassador Cinema was designed in a smart Art Deco style with seating provided for 1,124 in the stalls and 521 in the balcony level. It was equipped with a Compton 3Manual/8Rank theatre organ with Grand Piano that was opened by Thomas Grosch. The organ chambers were above the proscenium. Other facilities in the building were a tea lounge that had a sprung dance floor.

Within months of opening the Ambassador Cinema was taken over by the Oscar Deutsch chain of Odeon Theatres Ltd. from July 1937. It was re-named Odeon from 30th April 1945.

The Odeon closed on 3rd July 1976 and was converted into a Top Rank Bingo Club. Today it still operates as a bingo hall operated by the Independent chain of Crown Bingo Clubs.

A close-up view of the entrance to the Odeon in Autumn 1949:
View link

A full view of the facade of the Odeon in late-Spring 1956:
View link

A close-up view of the entrance in Summer 1971:
View link

Does anyone know of any of the staff who worked at the ODEON, Cosham, when it closed in the 1970s. I am researching the lost Portsmouth film “Beginning at the Centre” (1948, director Laurie Upton). Laurie Upton wrote that a German TV company screened “Beginning at the Centre” at the ODEON. They used the film for a TV documentary. I am hoping the someone from the ODEON at the time can remember this screening, which had to be a very unique event. Possibly someone can remember any people from the German TV company, who must have made copies of the film. The film “Beginning at the Centre” is lost in its original version. I have spent 2 years searching for it as my mother was an actress in the film. I found a partial copy which can be seen here: http://www.portsmouth.co.uk/what-s-on/cinema/finding-the-lost-film-of-twyford-community-centre-1-6918713

Hello paul_bennet89. I’ve only just come across your post. My late father Fred “Gomp” Gompertz was theatre manager at the Odeon Cosham from @ 1962 until he retired from Cosham in 1972.For the life of me I cannot remember any of the staff, so cannot help beyond this little nugget. Dad died in 2012. All the best with your research, Keith Gompertz

Worked there after it became Crown Bingo. I used to love heading up into the old projection room, which leads me to this…

There was a story that did the rounds regularly that on the last day of showing movies, the projectionist hung himself in the projection room. Can anyone confirm or (most likely I expect) deny this?

This of course was accompanied by a ghost story and that they haunted the upper regions of the building. All I know is it was VERY cold and creepy up there, any time of year.

Just seen your web site for first time. A series of notes asking if any one employed there. I was a projectionist at the Odeon Cosham in the 1960’s when Fred Gompertz was the manager. John Mountford ex Royal Navy was the chief projectionist. Dennis one of the team left for one year and travelled around with the Cinerama mobile show using a circus tent until a storm in Paigton destroyed the tent. A team of 4 projectionists and with 2 GK 21 35mm projectors, large spotlight and smaller slide projector all with carbon arc lights. Every Saturday morning at the children’s matinees Mr. Gompertz would go on stage and a shouting match would ensue with the hundreds of children while he tried to get them to keep quite – it never worked. The team of usherettes and foyer staff were a gorgeous collection of the most attractive women from the local area including Lynda and Shirely. Great camaraderie with the Essoldo projectionists at the other end of the Cosham high street. The Odeon North End in Portsmouth always saw themselves as above the rest of us as they were equipped with 70mm Cinemacanaca projectors and would have seasons of 6 months showing a single Todd-AO film such as The Sound of Music.

When we showed Daryl F Zanuck’s The Longest Day I had the local TA regiment build machine gun nests in the circle foyer and provide German guns for authenticity. These were all real and the patrons loved it. The local TA were in fact 21 regiment SAS before the days when everyone knew about the regiment – would not get away with that sort of real time display these days.

A great cinema the Odeon and now the only original cinema in Portsmouth still involved with entertainment through Bingo.