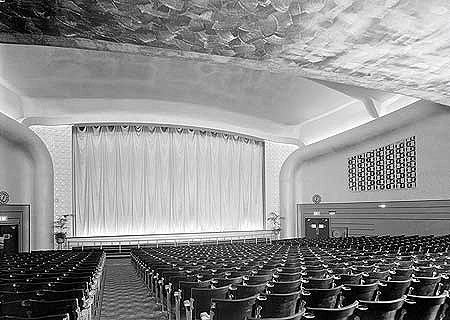 Located in Dudley in the Black Country part of the West Midlands. The Odeon is on Castle Hill, directly opposite the entrance to Dudley Zoo and the (now demolished) Plaza Cinema and the Dudley Hippodrome Theatre. The Odeon Theatre was built for and operated by Oscar Deutsch’s chain of Odeon Theatres Ltd. It opened on 28th July 1937 with Merle Oberon in “Beloved Enemy”. Designed by architect Harry Weedon who was assisted by Budge Reid from the architectural firm Harry Weedon Partnership.

It is designed in an Art Deco design typical of Odeon Theatres being built at that time. The auditorium was illuminated by deeply curved plaster troughs which cross the ceiling and extend onto the sidewalls, each one containing concealed lighting. Seating was provided for 1,234 in the stalls and 642 in the balcony.

The Odeon led an uneventful life, becoming part of the Rank Organisation when J. Arthur Rank took over Odeon Theatre’s.

It closed on 22nd February 1975 with Ron Moody in “Oliver” and the Rank release films were transferred to the Plaza Cinema across the road.

The Odeon was sold to the International Bible Students Association. By 1977 it was in use as a church. The current occupants Jehovah’s Witnesses carried out a major refurbishment of the building which they now use as an Assembly Hall.

In October 2000, the former Odeon was designated a Grade II Listed building by English Heritage.

Heres another view, showing how little the building has changed, taken around 1991 when I was a manager at the nearby UCI multiplex
View link

Ken Roe – Thanks for adding these cinemas. This Odeon looks like a great venue. The exterior Art Deco design is fine in its understatement. Churches are great tenants for old cinema treasures. Ironic that in the old days, movie theaters were a target for many Christian denominations!

Here is an October 1965 photograph I took while I was the Assistant Manager of the Odeon. “The Guns of Navarone” was the film playing that week:
View link

hi
i am researching my family history, and i have found out that my great grandfather george albert richardson was the manager of an odeon cinema in the birmingham area around the 1930’s i would love to see it but i am having troble fing out which one i suspect it may be dudley does anyone know how i might find out for sure . many thanks

Another shot of the exterior, this time from 1995:–

A photograph from October 2007:
View link

I remember going to the closing night, the poor usherettes were all in tears…!

OK it`s not a cinema any more but you have to admire the wonderful restoration job done by the JWs.

Just a thought Harry Weedon never designed a Cinema Th person credited as assisting him Did it. Weedon designed Houses. He prepared budgets for the Shar Prospectus in that Odeon Company. The Weedon Practice never designed anything until Robert Bullivant became head designer for the Practice.