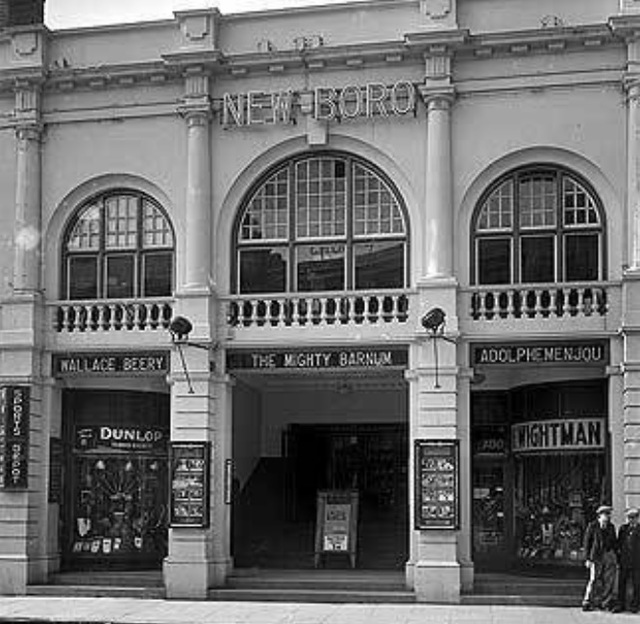 On 24 August 1912, an announcement appeared, in the Hinckley Times of the purchase of properties in The Borough in order to build ‘a high-class picture house for Hinckley’ equal to any in the Midland counties' which was to seat 1,200 people and would be ‘the last word in picture palaces’. The old properties to be demolished were the residence of Mr. J. Harrold and the shop of Mr. A. Brown. Plans approved by the HUDC September 1912.

Constructed in part of ‘Ferro Concrete’, the architect was John R. Wilkins of Oxford and the builder, Andrew Jeffcote of Hinckley (the plastering was by C. W. Summers of Hinckley and the marble flooring by the Empire Stone Company of Narborough).

A grand opening of the Hinckley Theatre and Kinema took place on 7 April 1913 (full account, Hinckley Times, 12 April 1913). The seating capacity was actually for 800, not the previously envisaged 1,200. The facade was classical in style, of three bays and two storeys with an attached Doric order. Stage ready for use by June, and variety shows interspersed films, eventually becoming the mainstay of the theatre (with the Palladium mainly showing films).

By 1928 the Hinckley and Dursley Theatre Company Ltd were building another new cinema - The Regent, at the corner of Regent Street and Lancaster Road - and the Hinckley Theatre closed in March 1929 for refurbishment.

It re-opened eleven months later as the Boro' Theatre on 13th February 1930, now with a seating capacity of 600. In 1934 the buildings at the rear were demolished and a new Super Cinema erected there, to be called the New Boro' Cinema (architect unknown). In 1935 the cinema was closed, the interior demolished, and the old section connected to the new auditorium, the Old Boro' auditorium becoming the foyer. The New Boro' Cinema could accommodate 967 and opened on 4th April 1935 with Ralph Lynn in “Dirty Work”.

From 29th July 1935 it was sold to Oscar Deutsch’s Odeon Theatres Ltd., becoming the Odeon Cinema on 1st January 1936.

It closed 3 June 1961 with Gordon Scott in “Tarzan’s Greatest Adventure” and Dean Martin & Jerry Lewis in “The Caddy”. The foyer section(Old Boro' Cinema) of the building was demolished in 1962 and the Nationwide Building Society (previously the Leicestershire Building Society) built its present premises on the site.

The main auditorium (New Boro' Cinema) part of the building became a bingo club, and was later demolished.