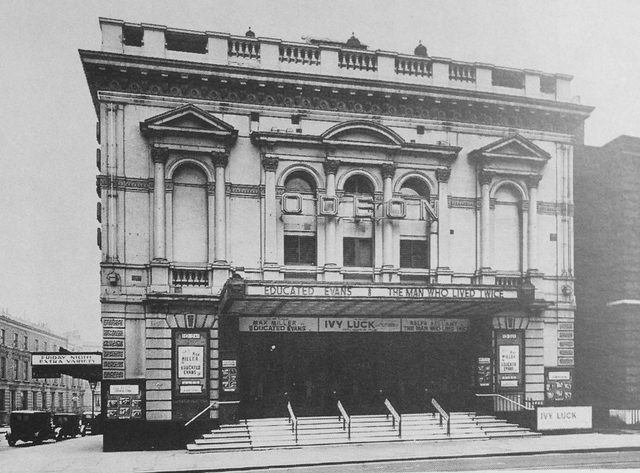 Located on Upper Street at the corner of Florence Road in the north London inner-city district of Islington. It was originally built in 1859/60 as a Vestry Hall for the Parish of St. Mary, Islington and the architects were Gray & Webb. It had a Neo-Classical style facade that contained pedimented windows. It was later used as a Town Hall until the present Islington Town Hall was built in the mid-1920’s.

It was converted into the Lido Cinema which opened on 27th September 1928. The auditorium was decorated in a modern Art Deco style and seating was provided for 642 in the stalls and 496 in the balcony. It was equipped with a Christie 2Manual theatre organ which was opened by Steff Langston.

From 3rd December 1935 it was taken over by Oscar Deutsch’s Odeon Theatres Ltd. chain and was re-named Odeon in 1936.

The Odeon closed on 21st January 1961 with Kenneth Moore in “Man in the Moon” and Harry H. Corbett in “Marriage of Convenience”. The organ was sold for scrap and the building was demolished to accomodate a petrol filling station, which still occupies the site.

Photograph taken January 1937. I have always been of the belief the building dated from 1853. Having lived a two-minute walk from the Odeon, my parents, my sister and I were regular visitors during the 1950s. My sister and I also attended the childrens' cinema club here every Saturday morning. Manager at the time was a Mr. Murray, who went from there to being manager of the Odeon, Highgate. Incidentally, Islington is not so much a north London inner-city district but rather a borough in its own right, within the ceremonial County of Greater London