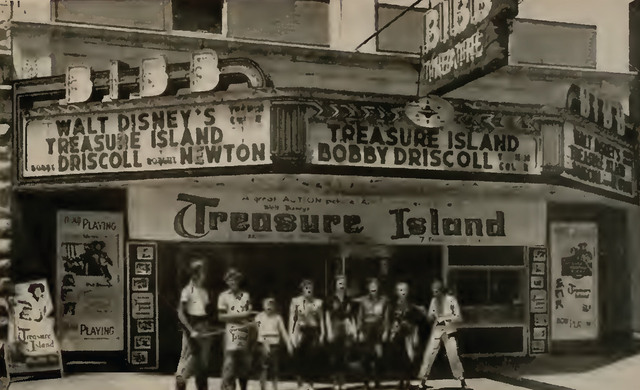 The Bibb Theatre was opened in late-1938. It was remodeled internally in 1963.

In October of 1973 the Bibb was playing a forgetable Blaxploitation movie called “Detroit 9000.” The evening shows on the final night of its run were cancelled for a radio station promotion and free screening of the Bibb’s next attraction, “Save The Children.” Apparently, no paper passes were distributed, but instead it was just general admission to everyone up to capicity. Needless to say, a huge crowd showed up well before showtime. When it came time to open the doors, the crowd started pushing and managed to shove the people in front through the plate glass doors.

In the resulting chaos, the lobby was trashed and a mini riot broke out on the street. Needless to say, the show was cancelled and scores of police, supported by the departments armored car, were required to restore order. The mayor, Ronnie Thompson, AKA Machine Gun Ronnie in respect for his tough stance toward crime, called out the city busses to give everyone a ride home which had the effect of quickly disolving the crowd.

“Save The Children” enjoyed a more sedate opening the next day.

A good view of the Bibb Theatre from 1986 in Macon.

The December 10, 1938, issue of Boxoffice said that a permit had been granted for the installation of a marquee at the Bibb Theatre.

In its October 15 issue, Boxoffice had reported on an unnamed theater nearing completion on 3rd Street in Macon. It was to have 800 seats. I think it must have been the Bibb. The article implied that the new theater was being built in an existing building, saying “…workmen have nearly completed removal of two upper floors to make room for the balcony.”

The November 25, 1963, issue of Boxoffice announced that the the Bibb Theatre was to undergo a $150,000 remodeling. Reconfiguration of the auditorium and seating would reduce the capacity of the house to 550 seats. The plans for the remodeling were drawn by the Atlanta architectural firm of Finch, Alexander, Barnes, Rothschild & Paschal.

Does anyone have any ideas who owns ths building? I’m trying to get some more information on the Bibb Theater and would love any help I can get.

Not quite sure who owns the building. The Bibb was a fine theatre at one time in the 50’s and 60’s showing first run movies, think Dr. Zhivago, a small lobby/concession area with a sweeping staircase to the balcony. I remember in the late 50’s, local WBML disc jockey, Bob Saggese did Teen Time on Saturday morning with music, fun and of course a movie, great times.

Great photo, that was before I remember the Bibb, not sure when they renovated, did not realize what a drastic change it was, am still hopeful someone will restore it.

Would you happen to have 50’s era photos of the Railto, Ritz and Grand from Boxoffice?

Would love to find memorabilia about this: as a kid in the early to mid 1960’s, the Bibb partnered with the local Coca-Cola bottler to sponsor a Kiddie Carnival on Wednesday mornings during the summer. Admission was 6 Coca-Cola bottle caps. Kids only movies, kids only admission. Anyone remember more details?