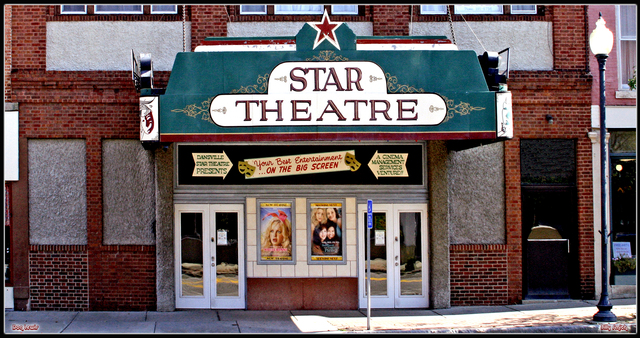 The Star Theatre was built in 1921 and offered vaudeville shows, along with movies. In 1928 it was equipped with a Marr & Colton organ. By 1941, it was part of the small Martina Circuit. After a long successful run, the theatre closed in 1985 and remained shuttered for over eight years.

Purchased in early 1994, and under renovation for a six month period, the theatre finally opened its doors in October 1994, with a menu of first-run movies.

Presently, additional renovations are under way, with the hope of eventually allowing the Star to host live performances.

The Star Theatre, designed by architect, Louis Pelton, opened its doors on June 4, 1921. The balcony which is really more of a loge has had its seats removed but otherwise is fully intact. The loge is “U” shaped. The sides of the loge extend a considerable distance along the exterior walls and are almost as close to the proscenium as opera boxes would have been if the theatre were built differently. The rear of the loge has very little depth.
I was in the theatre in 2002 and again on February 29, 2004 to see a movie and refresh my memory about the theatre. It’s more ornate than many village theatre and combines a blend of different architectual accents and motifs. Its art deco wall sconces and its neo classical plaster interior go well together.
The theatre supports a reasonable sized 3-sided marquee and a nice size vertical.
Unfortunately, the screen is rather small but still certainly as large or larger than the older multi-plexes or the older plexed single screen theatres. The proscenium certainly provides room for a considerably larger screen and hopefully, some day the Star will get one.

This lovely theatre is featured in a patriotic video showing a grandfather taking his grandkids to a documentary about WWII. This theatre is heavily featured and you get a good view of the interior, the balcony and the proscenium. I figured out where it was by doing a search for the word “Star” and the theatre’s telephone number which is shown on marquee. Check it out at this link: http://www.youtube.com/watch_popup?v=KTb6qdPu8JE I only wish there were more such videos of the interiors of these old theatres!

Is the original chandelier still hanging from the ceiling? Will be passing through that town this weekend though won’t have time for a tour enroute to Conesus Lake.

And today this theatre opened on June 4th in 1921…90 years ago! Congratulations!

Just returned from visiting the Star and can report back that the original chandelier is still hanging from the ceiling in the auditorium! They even had balloons and a birthday cake in the lobby to commemorate the theatre’s opening on this date 90 years ago!

And Dansville is the original home of Clara Barton, founder of the American Red Cross.

Great theater. The owner really takes pride in it. We drive 30 miles to go to it, even though multiplexes are closer. The popcorn is awesome!

My grandfather, James Martina began operating the theater in 1923. During WW2 people would flock to the theater to watch the news reels which were delivered by train from NYC across the Hudson River to Hoboken NJ to board the Pheobe Snow passenger train on the DL&W RR on its way west thru Dansville. In 1951 he converted the screen to silver and modified the projectors so he could run occasional 3-D movies. In 1955 he moved the screen forward and went all across the stage with a curved Cinemascope screen and stereophonic sound. He was always proud that he was able to get the magnetic striped sound prints so that he could present the movie in stereo. Most small towns were not equipped for stereo. He had two oversized seats in the rear of the theater for anyone who was overweight and could not fit in the tight seats of the time. There may have been more but that’s all I remember. The family ran it after his death with the help of Bill Moose, a long time family friend and loyal employee. Bill would sell tickets, run the projectors and clean the theater. He even had a bedroom setup behind the screen where he could sleep. -Chuck Hughes, grandson