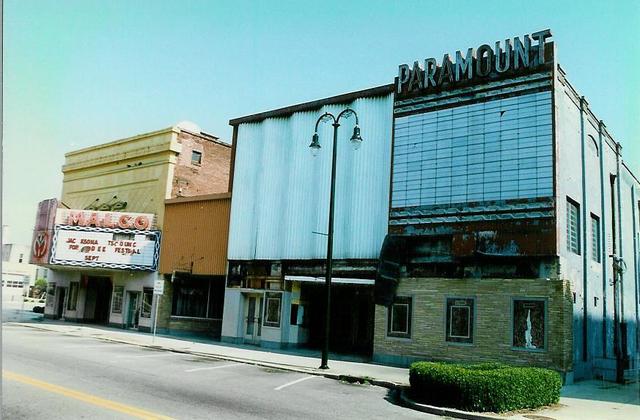 I have a single memory of the MALCO Theatre. In 1983 I drove through Jackson and stopped to admire the two movie theatres* on the town square. The MALCO was obviously an older vaudeville hall or small town opera house from the late 19th or early 20th century: very ornate terra-cotta facade. The marquee had been fairly ornate too. When I saw it, middle of the day, it was unlit and in serious need of repair and cleaning. The movie advertised on the letter boards was something current.

Looking inside the MALCO (and I believe it should be spelled with all capital letters as it is an acronym for Morris Aaron Lightman Company) revealed a completely stripped and curtained hall. MALCO did this to every old theatre they owned I believe – fortunately with the exception of the Rapp and Rapp designed Orpheum in Memphis. Their philosophy had something to do with “strip it to the bare bricks and hang curtains over the walls.” Possibly it was a matter of getting the number of seats up. I guess we’ll never know.

About a year later, I aquired what I believe to be a mirror from the Jackson TN MALCO theatre’s lobby. It is Louis XIV-esque – supply house baroque. The mirror was reportedly found in the theatre’s basement and was – ahem – liberated before demolition. With the mirror and the ornate facade I can’t help but think that this hall was part of the Wells Bijou chain which I do know operated for a time in Jackson. Also, Keith Vaudeville had a hall in Jackson, which I suspect, but have no proof of, operated in this venue too.

*The other theatre was the Paramount (q.v.)

And here’s the Malco and it’s nearly next door neighbor, the Paramount:
View link

Boxoffice of October 28, 1950, said that the Paramount Theatre in Jackson, Tennessee, had been renamed the Malco. The new Paramount Theatre opened a couple of doors down the block some time later that year or early in 1951. The first mention I’ve found of it is in the January 20, 1951, issue of Boxoffice.

The new Paramount, not the old one, was formerly the State, which had been entirely rebuilt except for the four walls. The aka State should be moved to the Paramount page and the aka Paramount Theatre added to this page.

Wow,what a sad picture,I think Jackson is in East Tenn.

I live in Jackson and it’s actually in West Tennessee about half way between Memphis and Jackson. We had several Malco’s around town at one time but one by one, they have all gone away. The good news, Malco is to open a new one here in the Summer of 2014.

The old Malco was a long, large theater with two huge light fixtures and even with the curtains it was still pretty ornate compared with the other ones around the same time. I hate they tore it down but it would have been leveled with the tornado that came through around 2006. We’ve had so many, can’t remember exactly the year.

This was renamed Malco on October 5th, 1950. No big grand opening ad was bought for this theatre.