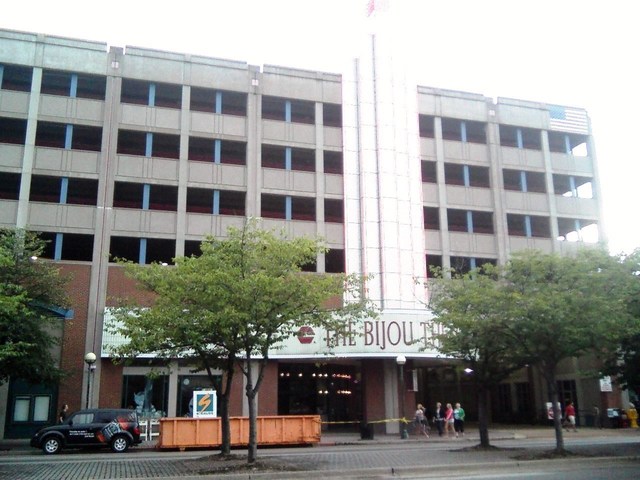 The Carmike Bijou Cinema 7 is the first and so far the only theatre to open in the downtown Chattanooga area since 1960 when Martin Theatres opened the State Theatre. The Bijou 7 opened in 1994 and is among the last breed of cinemas to be built prior to the proliferation of the stadium style seating design.

The Bijou Cinema 7 was closed by Carmike Cinemas when they opened their new Carmike Majestic 12 in November 2009.

Somebody please explain how a theatre came to be combined with a bus station and parking garage. Is the interior more interesting than the exterior?

Can’t speak for the bus station, but quite a few of the Loews theatres built in the urban areas during the 1970s-80s were underground and/or anchored to parking lots.

The only movie I saw here was “Harry Potter and the Order of the Phoenix”. (Auditorium 1; 138 seats)

The former Bijou Cinema 7 has been converted into a mixed use project called The Block, with retail space, food service, and a fitness center equipped for rock climbing, which is apparently one of Chattanooga’s favorite activities. Even the facade of the building has been reconfigured to provide space for rock climbing, some of it on transparent walls (probably some sort of polycarbonate rather than glass.)

Their web site features a slide show. The building no longer contains any trace of the theater, and I’d never guess that it had once housed one.

The Bijou Theatre, it was completed in 1994 and was the first theater built downtown in nearly 20 years. It cost $7,000,000 and consisted of a Multiplex movie theatre below a 650-car parking garage. The Other portion also served as the northern terminus for the Chattanooga Area Regional Transportation Authority’s free electric shuttle system.It closed in 2009 and thee building sat dormant for a few years. The Old Bijou site was turned into a rock climbing complex nicknamed “The Block” which opened last year.