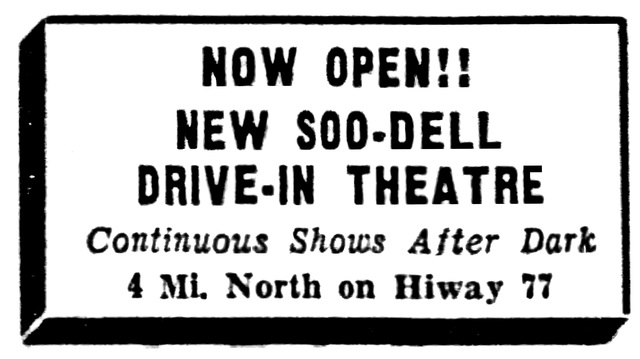 One of the first of South Dakota’s early drive-in theatres to open was the Soo-Dell Drive-In, Sioux Falls, SD. The name Soo-Dell comes from the location of the new drive-in located between Sioux Falls and Dell Rapids, SD. It was claimed to be the first outdoor theatre to be built in the mid-west. I could not find anything to disprove that claim. I do believe it to be the first drive-in theatre to open in South Dakota.

The new drive-in was opened by Edward E. Paul, who was a well known musician and music teacher in the Sioux Falls area. The new airer opened on May 29, 1947. One of the unusual features of the Soo-Dell Drive-In was it was built without car ramps. It was said to have a natural amphitheater setting allowing a clear view of the screen. The new outdoor theatre had a capacity for 200 cars with (refreshment) curb service to each car.

I worked in the theaters in Sioux Falls starting in 1965, I never heard of a Soo-Del Drive in or any Drive in on Highway 77 in the Sioux Falls area. I did work (1965-68) at the East Park Drive In which was owned by Drive-in Theaters Inc. (H.E. Hanson, D. Nalgren, H. Boyd.) and operated by Welworth Theaters, which later became MidContinent Theaters. The theater was located on E Hwy 38 on land which is now occupied by a K-mart and had a capacity of 350 cars. it did open in 1947. The late Larry Hanson who went on to become an executive with Essaness (Excellence) Theaters was manager of the East Park in 1968-69