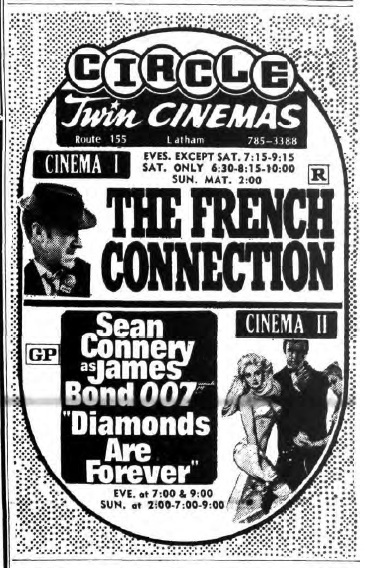 The Branche Cinema opened in the early-1960’s on Route 155 in Latham. The theatre was a free standing building with a large parking lot. By the 1970’s, it had been twinned and renamed Circle Twin Cinema, which lasted to about 1979 when it closed.

In the 1980’s, the building was reopened as the Market Street Music Hall, a huge pizzeria with a tiered floor and a theatre pipe organ installed for entertainment (sorry, organ enthusiasts—I don’t know where the organ came from or where it went afterward). That operation lasted about ten years, then the Circle Twin Cinema became a swimming pool and spa sales facility, which it remains today.

Here are some ads from the Circle Twin days:
http://plantweed.blogspot.com/search?q=circle+twin