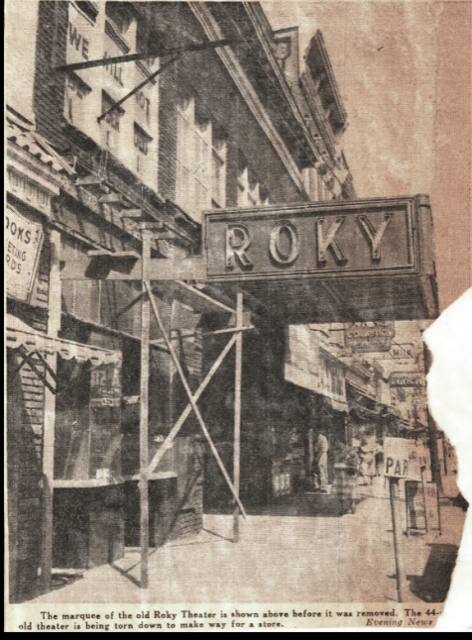 In 2017 American Thrift Store and Latino Style can be found at this address.

Best of all, the ROKY, located next to the old Crystal restaurant on Smith Street. It showed Republic pictures, Chapter pictures, original John Wayne movies; it had lotto night, dish night, kids for a dime and double features. It was originally named the ROXY. The New York Roxy sued and got an injunction against the use of its famous name, so the owners twisted the metal “X” into a “K” and the name ROKY appeared, a name forever unique in Perth Amboy history, leaving a warm place in our hearts.

Was refereed to as the Garlic House. Operated from 1910-1954'ish from my info first called the Grand Theater then renamed Roky in 1928 Started out as a Nickelodeon. The building was owned by Edward Switzer who also operated the Central Hotel in Perth Amboy; he leased the theater to a succession of tenants.

The February 11th 1928 issue of the Motion Picture News mentioned that Aron Schusterman had taken a 21year lease on the Grand Theatre in Perth Amboy and was going to do an extensive remodel which was estimated would cost between thirty and forty thousand dollars. Other trade papers mentioned it would also reopen with a new name. Schusterman also operated theatres in New Brunswick and Red Bank.

As mentioned in a comment above, the Grand reopened as the “Roxy Theatre”. A short promo article in the neighboring “Carteret Press” (September 14th issue) said it opened a few weeks earlier, which would have been late August. That issue also carried an ad that I am uploading. The Film Daily Yearbook also listed the theatre as the Roxy from 1929-1932 (as the “Roxie” first year, “Roxy” the next three), although the name change happened much sooner than that.

I can’t find any specific records of what happened and when it happened as the Roxy stopped advertising in surrounding papers shortly after opening, but the clothing store that opened next to it was advertising as being located “next to the Roky Theatre” in late summer 1929.

One other note, despite the caption on the newspaper clipping that Craig posted a few years back, it does not appear that the building was torn down. Comparing the current street view which dates to this past July with the clipped picture, it appears to be the same building. Note the façade and windows. Accessing the address through Google Earth, the view from above shows what appears to be the old auditorium still in place. No doubt gutted for retail space, but still standing.