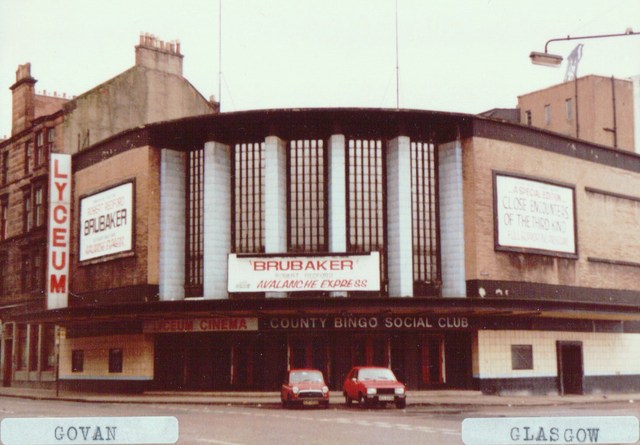 Built on the site of the Lyceum Theatre of 1899, which had been in cinema use until it was destroyed by fire in October 1937. Known as ‘Govan’s Super Cinema’, the Lyceum Cinema opened on 19th December 1938 with Gracie Fields & Victor McLagen in “We’re Going To Be Rich”. It was designed by Charles J. McNair (who also designed the Regal Cinema and Ascot Cinema in Glasgow) and noted cinema architect Henry F. Elder.

In November 1974, the former circle was converted into a 480-seat cinema, while the stalls area became a County Bingo Club. The cinema section was closed on 12th January 1981, but bingo continued downstairs.

Thanks to Gala Bingo, the new owners of the Lyceum Cinema, I recently got the chance to visit the cinema section which had been closed since 1981 and to photograph it for inclusion on my website.

Mothballed for a quarter of a century, this lovely cinema still has original seating, Art Deco style fittings, projection room equipment and a hand-painted Disney characters frieze in the foyer.

Sadly the Gala Bingo Club closed in October 2006 and the building is now empty. On 15th May 1987, Historic Scotland designated the Lyceum Cinema as a Grade B Listed building. It is listed on the Buildings At Risk Register.

Some more information and photographs of the Lyceum Cinema here:
View link

Sadly, Gala closed the Lyceum on October 8th 2006, and the building now sports a For Sale sign above the main entrance. A new gallery of interior photographs, including some archive shots, has recently been added to the link posted by Ken above.

Three vintage and a couple of fairly recent photographs of the former Lyceum Cinema, courtesy of the Cinema Theatre Association archives:
View link

Some excellent photos on another board.