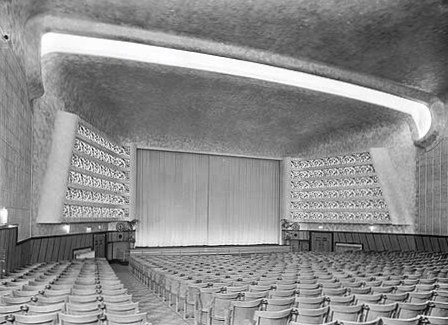 The Odeon Theatre was built for and operated by the Oscar Deutsch chain of Odeon Theatres. It opened on 13th March 1937 with Paul Robeson in “Song of Freedom”.

Designed by architect Harry Weedon who was assisted by Budge Reid from the Harry Weedon Partnership, the Odeon was typical of the so-called Odeon Art Deco style of architecture. The facade was faced in cream faiance tiles and had a slab tower feature located on the left hand side, upon which was the theatre’s name. To the right of the entrance was a parade of shop units.

Inside the auditorium, seating was arranged in a semi-stadium style with no overhang on the raised balcony section and there were 958 seats in the stalls and 288 in the balcony. Lighting was via troughs across the ceiling which contained concealed lighting and there were six decorative panels on the splay walls each side of the proscenium opening which were designed by interior designers Mollo & Egan.

The Odeon began a policy of splitting the week between bingo and films from 1972 and closed as a cinema on 15th May 1976 with Sean Connery in “The Man Who Would Be King”. It was converted into a Top Rank Bingo Club which was later operated by Mecca Bingo. Mecca pulled out of the building in May 1999 in favour of newly built premises.

The Odeon was converted into a Chicago Rock Cafe which is located in the former front stalls area and Liquid Nightclub which uses the rear of the building and the foyer areas.

A close-up of the entrance in September 1949:
View link

I worked there from 1988 till 1991 when it was top rank. only one member of staff still worked there from when it was half cinema/bingo (her name was brenda)There was lots of the original fittings and features, if you wish to know more please feel free to contact me..
If you have any photos of top rank birkenhead (i belive the old ritzy cimema, claughton road )i would love to see them.
I also worked there.

I worked at Wrexham Odeon during the early 70s until it’s closure as a cinema as a relief projectionist (being based at nearby Chester Odeon). The Chief projectionist was Mervyn, who operated a well maintained projection suite supported by another projectionist, Jean.
The auditorium, although shared by Top Rank Bingo, still retained some of it’s original features that was typical of the 1930 art deco Odeon design. Mervyn battled to retain as much of the cinema lighting etc as was possible during this difficult time. He along with several members of staff campaigned against the cinema’s allocation of days being removed completely, alais without success, and the cinema gave way to full-time bingo.
Wrexham was then without it’s Odeon until a new site was aquired and Odeon returned to the town in 1997 at Plas Coch, this time offering a choice of 7 screens.
I returned to Wrexham as Chief Technician of this new mulitplex. Wrexham has very discerning film goers and the new Odeon certainly became a big hit with them. Looking forward, with digital projection upon us, the Wrexham audience are in line for even better technical presention than ever before and the future of cinema in this great town seems secure- who would have thought that in the mid 70s!!!
My past history- Starting early 1962 at ABC Regal Chester, there for 8 years. Classic (Tatler), Chester. Odeon Chester from 1971 (promoted to Chief Technician 1977). Moved to Odeon Bromborough multiplex for it’s opening in 1991 as Chief Technician. Opened the technical operation at Wrexham Odeon 1997. Dual site Chief Technician over Chester and Wrexham Odeons 2005-2007.

I am currently looking at the history of the former Odeon / Top rank bilding on brook street wrexham now Liquid and envy. I am struggling to find pics and and infomation about the building and keep turning up the same old details. There must be some one out there which has some old pictures of the site during construction or inside the building or even some historical accnts of the building itself. anything would be a great help. please email me @

An April 2007 photograph of Liquid & Envy Nightclubs, in the former Odeon Wrexham:
http://flickr.com/photos/jonesthecamera/460329007/

I am a member of a local paranormal group (www.northwalesparanormal.com) who have recently done a investergation in the old Odeon and come up with some intresting findings, one being a sprit of the old projectionist. I was wondering if anyone that used to work there, or have any history on the place including pictures of staff etc could they please email me at .uk and title the email the old odeon

Hi all, does anyone know if the ODEON clocks are still in place? Will travel and pay good money if anyone can locate one for me.