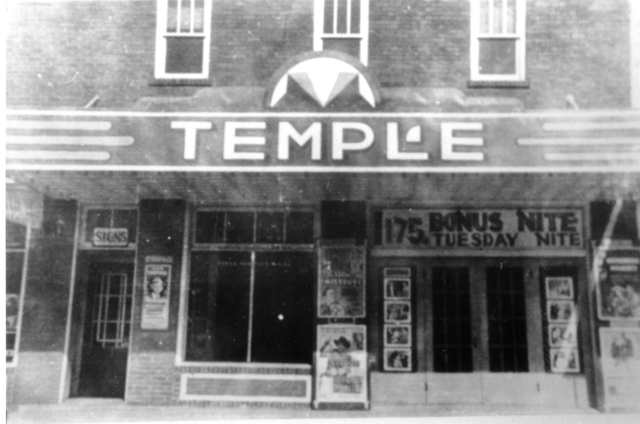 The Temple Theatre was opened in 1937, replacing the Capitol Theatre which had burnt down. In the 1940’s it was rennamed Strand Theatre and by 1950 it was operated by Affiliated Theaters Inc. of Indianapolis, IN. It was still open in 1955, but had closed by 1956.

Here is a link to November 2012 article talking about the theater’s current preservation plans:

Here is another article about the renovations at the Temple Theatre, this one from 2014.

A timeline with the article notes that the house opened in 1937 as the Temple Theatre, was renamed the Strand sometime in the 1940s, and was closed in the 1950s. The Temple replaced the Capitol Theatre, which had burned, on the same site, but the article does not make clear whether it was entirely new construction or just a rebuild within the surviving walls.

Portland Preservation Foundation bought the house in 2013, and restored the earlier name Temple Theatre. The renovations are still ongoing. The Facebookpage has a few photos, including a couple showing the restored marquee.