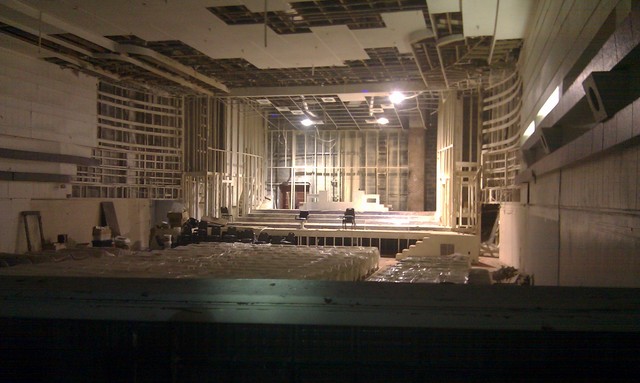 I don’t know all the CINERAMA Films shown at the Rosna, but I know

THE WONDERFUL WORLD OF THE BROTHERS GRIMM

played for sure because I know I saw both of them at the Rosna (I probably saw other CINERAMA Movies, but don’t remember for sure).

The Rosna opened as a CINERAMA Theater on Wednesday,
October 18, 1961.

The CINERAMA Roadshow Engagement of Stanley Kramer’s classic comedy, IT’S A MAD MAD MAD MAD WORLD opened on August 7, 1964. This was the first single film, single lens projection CINERAMA movie to be shown at the Rosna. All previous CINERAMA films had required 3 films and 3 projectors.

Saw This is Cinerama there in the Spring of 1962.. The Rosna was just around the corner from the late Newport Theatre (saw several Disney movies at the Newport..

I can’t believe Stanley Kubrick’s classic sci fi 2001: A Space Odyssey wasn’t mentioned here. I saw it in CINERAMA at this ROSNA in 1968 and it was magnificent. The theater was sold out and the audience mesmerized. A great theater experience. One I will never forget. So sad to see it shut down.

Michelemichaels430…. “2001: A Space Odyssey” has indeed been mentioned “here” both in a comment posted on March 18, 2008 and in a related article linked under News About This Theater (located on the right margin of this page underneath the map and nearby theaters).

Hopefully I haven’t missed the bus here, but is there any chance I could get ahold of some old pictures of this beautiful theater? I’m trying to put together a project to hopefully re-open the theater, and being able to demonstrate its former glory would go a long way.

I have pictures of two Cinerama movies posters for the Rosna:

Looks like the building is still standing. When were these pictures taken? The inside is HUGE! So sad to see it like this.

Hey Colgraff2008, any luck or progress on getting the theater going again?