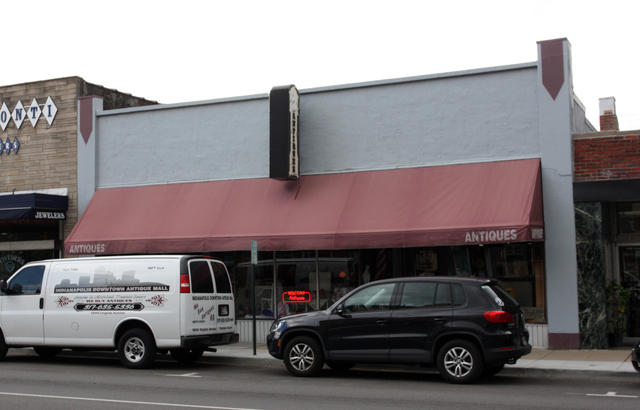 A list of movie theaters in the November 25, 1915, issue of The Indianapolis News has this house listed as Hair’s South Side Theatre. Two other theaters were listed that must have been under the same ownership at the time: Hair’s Lincoln, East Ave. and Lincoln, and Hair’s Apex, Stevens and Virginia Avenue. “Bair’s” was probably a typo in the source Chuck got this theater from.

Roy R. Bair of R.R. Bair Theatre Circuit ran Bair’s South Side Theatre (most definitely not Hair’s) along with five other theaters in the Uptown, St. Clair, Strand, Lincoln, and Ritz. It opened on May 14, 1918 on the site of a smaller theater that had originally held a retail store (G.H Vail’s Newsstand and Confectionary and briefly Kester’s Saloon) before becoming the 300-seat Green’s Theatre in 1913. The Bair circuit took on Green’s Theater changing it to Bair’s South Side Theatre in 1914 and had success.

Bair razed the original Green/South Side late in 1917 to double the capacity creating a new 600-seat facility opening in 1918. However, Bair dropped the theater in 1922. It existed as a silent operation under the George H. Sanders Circuit (including the Apex and the Sanders).

When the Granada Theatre opened across the street at 1045 Virginia and installed sound, Sanders was in trouble. He was unable to convert any of his theaters to sound. His theatres are all auctioned off in 1928 including the South Side. It was purchased and used for some sporadic live events and doubled as home to the Sunshine Mission to assist Depression-era south side residents in need.

The South Side had a hiatus before getting one more shot as a cinema being equipped for sound late in the 1930s but advertising ceases in 1940. That is likely the end of the theater’s life as it becomes home to Sablosky’s Department store by 1943. Its longest stint was an antique mall that operated into the 21st Century.

Ah, so it was that issue of the News that had the typo. No wonder I was unable to find other references to Hair’s theaters.