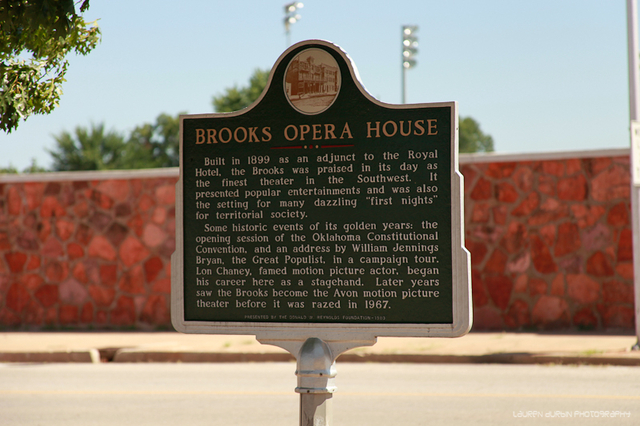 The Brooks Opera House was built in 1899. In 1913 it was renamed Guthrie Theatre. In the panoramic 1910 image in the link below can be seen the side wall and stage-house of the old Brooks Theatre in Guthrie, Oklahoma. Once someone told me that the Brooks Theatre and Royal Hotel shared a common lobby. It closed as a full time movie theatre in 1934, but for the next two years it had sporadic movie screenings. It was demolished in 1967.

Brooks Opera House was designed by Joseph Foucart, a renouned architect from Paris, France, who pariticipated in the Great Run of ‘89.

Brooks Opera House and Muskogee’s Ritz (nee-Hinton) Theatre were so similar in style and design, one can’t help but wonder if both buildings were from J. Foucart’s drawing board.

The status above says unknown, so i’ll just go ahead and confirm that the building is completely demolished.

Wonderful vintage interior/exterior photos show exactly what this frontier theatre was all about. To see these exciting images type in word ‘Guthrie’ …
View link

The Brooks Opera House opened in 1899. Its immediate predecessor in Guthrie was the McKennon Opera House which is listed in the 1897-98 edition of the Julius Cahn Official Theatrical Guide. Unfortunately, there are no street addresses for the theatres listed in this Guide. The McKennon had 700 seats and was located on the second floor of its building. Its stage was 26 feet deep and there were 8 members of its house orchestra. The 1897 population of Guthrie was 12,000.

This site contains a little material on the late Brooks Opera House (AKA Avon);
http://www.roadsideoklahoma.com/node/383

This is a modern view of the parking lot where the Brooks (AKA-Avon) Theatre once stood,
View link

I recently found a Guthrie Theatre sign for sale and did some research to verify it’s authenticity before purchasing it. There’s a lot of information available on the Oklahoma Historical Society site: https://gateway.okhistory.org/ I’ve posted several images that I discovered.

The sign is indeed authentic. The theater went by several names including the Brooks Theatre, Brooks Opera House, and Guthrie Theatre. The various names appear to have been used interchangeably. I found no mention of it ever being referred to as the Avon Motion Picture Theater, other than the description on the historical marker.

The covered entrance with the Guthrie Theatre sign was not original and was added sometime after 1910 and before 1940 based on photos.

Note the hotel was named the Hotel Royal in 1910 and by 1940 changed to Royal Hotel.

Beginning in 1913, the Opera House went by the name of the Guthrie Theatre. Ned Pedigo may have been the theater’s final operator wiring it for sound in the early 1930s. Regular screenings ended in 1934 with sporadic offerings in 1935. It does not appear to have been used for further cinematic offerings.

dallasmovietheaters – Looks like it was called the Guthrie theater as early as 1910. No? http://cinematreasures.org/theaters/16067/photos/290833