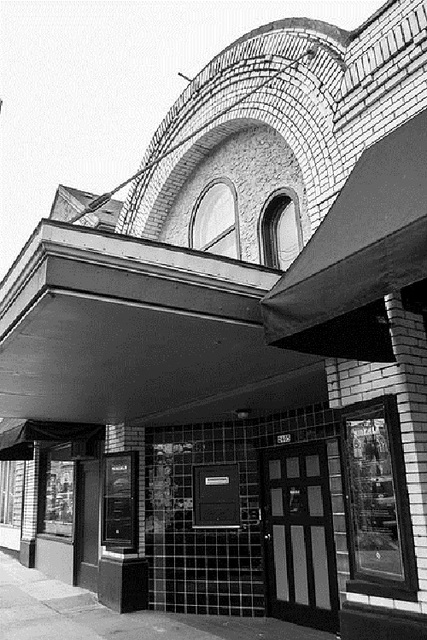 From the plaque-like signage posted in one of the old poster boxes by the front door:

1912 - The Ideal Theater was commissioned by Conrad LeBlanc, and designed by Emil Schachts & Sons, authors of the famed Oriental Pavilion at the Lewis and Clark Exposition of 1906. It opened for business as a silent era movie house in 1912.

1927 - Originally, the Ideal Theater’s ticket booth was located in the center of the lobby, which also featured a vaulted ceiling and plaster relief of angels. The facade was remodeled in 1927. A sound projection booth and manager’s office replaced the vaulted ceiling.

1940 - A true neighborhood cinema, it defined lower 23rd Avenue alongside such storied landmarks as the Vaughn Street Ballpark and Besaw’s Cafe. It’s corner retail space once housed the Senate Barber Shop. The Ideal was also called the Blue Bird and the Elmo.

2004 - The Ideal Theater was closed as a neighborhood movie house in the late 1950s. It then served as a warehouse for thirty years. In 1986, The Ideal building was purchased by James Lommasson and Stewart Harvey, who remodeled it into a photography and design studio."

According to this site, the Ideal was also called the Senate and the Crown:
http://tinyurl.com/23m3sf

There are also photos of the theater on this page:
http://tinyurl.com/yw4j3e

I don’t know if the Jack that wrote the caption is also the Jack who took the photos, but if that’s the case we appreciate the use of the photos on this site.

My goodness! My gratitude is extended to you, Jack, for posting the history of this theater and the photos as well. The Elmo, as we knew it, was not just another theater but was my home for a brief period when I was a child and I am delighted to see the building is still standing.

My parents scraped together every dime they could and purchased the Elmo Theater in November of 1949. The budget was extremely limited so to try to cut expenses, we lived in that theater and the adjoining barber shop. The barber shop became our combined living room/kitchen, the kitchen, basically, a two-burner hot plate and small table and chairs. For water, we had to use the sink in the theater’s bathroom. The theater’s bathroom was just a small one-room facility. No separate men’s and women’s rooms. If the bathroom was occupied when you needed to use it, you waited outside the door in the lobby. Maybe that wasn’t such a bad thing. The lobby always smelled like freshly popped corn so, most likely, a few trips were taken to the concession stand while waiting for the bathroom to empty. That was the only bathroom in the theater so was the one the family had to use, also. There was a staircase leading from the lobby to the room that, apparently, had at one time been the office. That room became my parents bedroom with the headboard of their bed just inside the upper-floor windows. My sister and I slept in a bunk-bed in a closet just to the right of the top of the stairs. It was just big enough for the bunk-bed with about a foot left over. We could touch both side walls without getting out of bed.

The projection room was upstairs, too, and was west of my parents' bedroom. It had a sink which we used to wash up and brush our teeth. There was no shower or bathtub so we made do with sponge baths, which, at the age of 9, was plenty good as far as I was concerned.

My father ran the projector, took care of the choice and rental of films, getting the concession stand supplies, janitoring, bookkeeping, etc. My mother sold tickets in the booth as well as helping with the cleaning and upkeep of the theater. My sister helped by ushering, though I don’t remember ever having enough of a crowd that it was necessary to have an usherette. A lovely gal by the name of Rosemarie was hired to run the concession stand. At times she would become annoyed by my helping myself at the concession stand but, sometimes, that was all there was for dinner.

The theater was never in very good condition when we owned it. Countless hours were spent cleaning it and repairing whatever my parents could afford to repair. The seats were old, some torn and losing stuffing and not comfortable. Always there was debris to be cleaned up and gum, gum, gum on the floor and under the seats to be removed.

The films were always B movies though many of them were, really, quite entertaining. The price of a ticket was in line with what the customer base could afford. It was, after all, a neighborhood theater and this was not a ritzy neighborhood.

Sadly, however, my parents not only didn’t make a profit, they lost money, getting deeper and deeper in debt until we lost the theater in May of 1950 when they had to file for bankruptcy.

So, you can imagine my delight in viewing the pictures of the current “Elmo” and reading the history. Many thanks, Jack, for allowing me to relive a short but memorable time in my life.