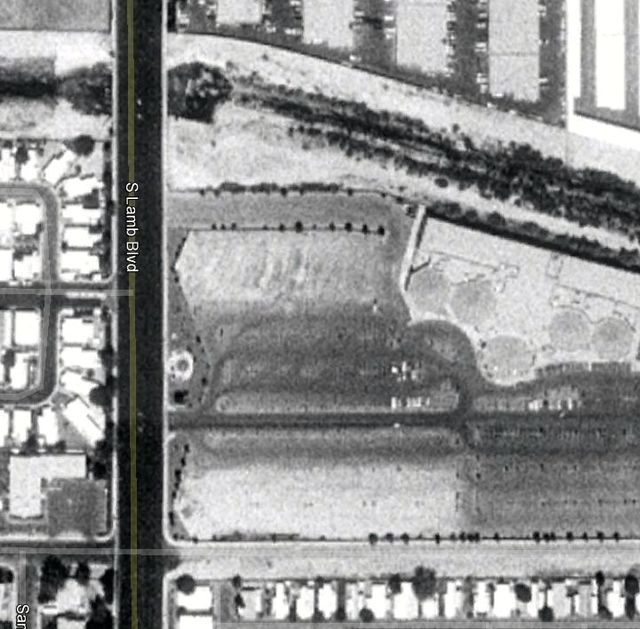 The Desert 5 Drive-In was opened on June 30, 1975. It was closed in 1989. This drive-in was replaced by the Desert 12 indoor theatre, that later became the Desert 16 and has also been demolished. The property is currently a vacant plot.

I went to the Desert 5 Drive In a year or two before it closed. At that time, that section of Las Vegas was growing so fast, and there were so many lights in the neigborhood outside the theater that it was actually difficult to see the movie on the screen. It’s a shame, because it was a very nice drive in.

I saw Star Wars there for the first time. I saw Meatballs, too.

The drive-in of choice for my family,along with the adjacent Skyway,during our short time(Mar.‘79-Sept.'81)living in Vegas.

When the drive-in was demolished, Syufy/Century built the multi-plex walk-in theater on the same property. I believe it housed either six or eight screens. Saw movies several times at both the drive-in and walk-in theater, but remember it being much better attended as a drive-in.

Now it’s a graffiti-covered walled/fenced-off parking lot full of dead trees, weed-laden asphalt and no structures. I’m surprised it’s been left like that for so long. The surrounding neighborhood is one of the oldest in town, but I’m sure the residents don’t appreciate the blight.

So, the junior high my brother-in-law attended was a movie theater at one time? And it was right near his house? Man, will he mad when I tell him that!

Oh, and about the “residents don’t appreciate the blight”, the neighborhood is mostly new, built between 1989 and 1999. The whites moved out, and today, it’s a Spanish-speaking neighborhood. I visit it frequently for the in-laws, who live down the street from this theater.

Jerome Mack Middle School is now built on this site.

Though I never visited the theatre myself, my coworkers told me (and the photos seem to suggest) that the original snack bar building was used as the lobby of the indoor theatre.