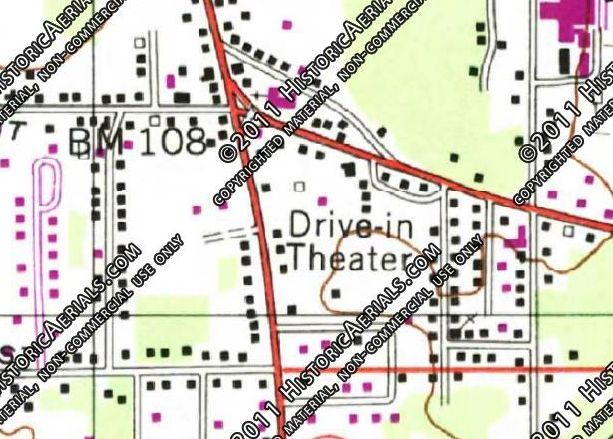 Part of the Fred McLendon circuit in the early seventies.

It looks like this one might’ve actually been in East Brewton, back in the woods a few yards southeast of the US 29/AL 41 intersection.

In 1956 it was part of the MARTIN THEATRE CHAIN of Columbus,Georgia.

The above address will map to the location of the drive-in, which is southwest of the intersection.

Here is a 1958 aerial photo of the drive-in, courtesy of Earth Explorer and USGS:

Approx address for this drive-in was 130 Florida Street. Part of the outline is still there in the back of the building onsite.

Martin Theatres Circuit built this theater early in 1950. A naming contest found Cordie Thompson of East Brewton the winner using the name, The Eagle Drive-In. Thompson said that since the high school team was the W.S. Neal Blue Eagles, that seemed appropriate. The Brewton and East Brewton mayors were on hand as the 315-car drive-in filled on its opening date, June 8, 1950. The opening feature was “The Big Cat” starring Preston Foster.

The long-running theatre continued into the 1970s. It was demolished and became home to Cars 4 Less at 110 Florida Street in the 21st Century.