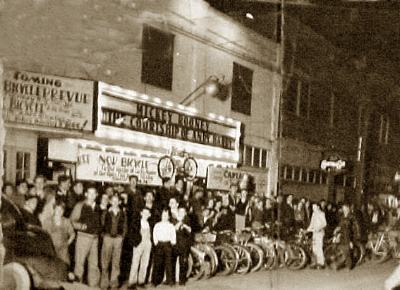 Looks as if Plaza signage later was moved over to adorn the former Roxy exterior. Note that the rough stone facade match in bottom two pictures.

Obviously a favorite pastime of Plaza owners was to change marquee signage. To see a period photo of the Plaza in one of its many incarnations type in word “plaza”, then hit search …
View link

This was in the Joplin Globe in February 1950:

Picher, Okla., Feb. 10.â€"After a quarter-century of tenancy at 107 East Second street, the Boston Realty Company today moved its quarters out of Picher’s “danger zone” as outlined by the Eagle-Picher Mining and Smelting Company. This is the first move of a business firm from the four square-block area the mining company says may be hazardous because of being undermined.

The move was announced by Joe Vincent, manager of the agency the last 27 years, and this afternoon he established his new office at 218 South Connell avenue, a block and a half from the limits of the undermined zone. The Boston Realty Company handles leases and rentals for the Eagle-Picher company.

Picher’s darkened theater, the Plaza, is to be moved out of the danger zone as soon as possible, according to announcement today by L.H. Wells, Picher manager. He quoted Kenneth Blackledge of Oklahoma City, division manager for Video Theaters, owners of the Picher house, as saying the 1,000-seat theater would be moved. The Video company owns another theater in the undermined area but this house has been closed for several months. The Plaza theater suspended operations when the mining company recommended that residents and business houses of the district evacuate the area within 30 days.

According to these LIFE 1950 photos, the Plaza Theatre was closed, condemned, & razed in 1950;
boxoffice & posterboard view -
View link
and a street view
View link

One more Plaza Theatre detail from LIFE;
View link
Don’t believe a new Plaza was ever built. Signage was just moved over to an existing movie house.

The reason for the LIFE 1950 essay on Picher was because the government had condemned over half the town due to unsteady underground mine shafts. The Plaza Theatre was razed due to this fact.
It was reported last Sunday on Dateline NBC that now (sixty years later) what’s left of Picher has also been condemned. By the end of this year citizens will be evacuated and all buildings will be bulldozed under. Picher will be no more!

They just featured Picher on on History Channel’s “Life after People”. Not much left there.

The Winter Garden Hall turned Winter Garden Theatre had been advertising at least from 1919 at 116 East Second Street. The former Winter Garden Theatre relaunched with new operators from Tulsa as the first of three buildings to house a Plaza Theatre. Plaza Theatre #1 opened on August 11, 1933 with the Marx Brothers in “Horse Feathers.” The Plaza Theatre burned down on January 27, 1946 in a fire that originated at the Brass Rail Taproom and took out the Plaza and three other businesses. (It could have a separate entry with that history if one wanted to be technical.)

The operator moved the Plaza nameplate to the Mystic Theatre at 112 East Second Street in Picher beginning with shows on February 10, 1946. It has its own entry. Video Independent Theaters reduced the town to just one theatre closing the Roxy in July of 1949 as the town’s economy was in decline. Unfortunately, the Plaza and the former Roxy were in the condemnation zone as the city feared a major cave-in at the Eagle-Picher Mining and Smelting Company.

This entry would be for Plaza Theatre “#3.” The final Plaza was created when Video Independent fashioned a new theatre gutting an existing building one block east of the former Plaza. But during that construction, the second and vacant Plaza Theatre/former Mystic Theatre also burned down on June 22, 1950.

The third and final Plaza Theatre location in downtown Picher opened on July 12, 1950 with “My Friend Irma Goes West” featuring Dean Martin and Jerry Lewis and supported by a sports reel and cartoon. The operators stressed that this was a “new and safe area” away from the condemned part of the city. The building used cement fortification to try to avoid burning down a third time. And it achieved that goal although going out of business just over five years later in 1955.

However, “safe area” would prove to be a misnomer as the entire city of Picher was deemed too toxic to continue. The building as well as virtually every other building in town was razed when the town disbanded early in the 21st Century.