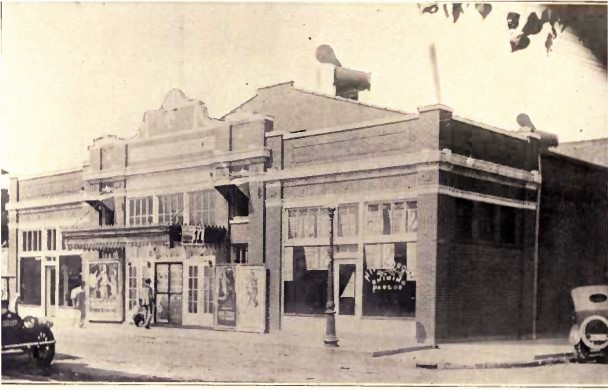 The Hippodrome Theatre was opened November 24, 1917.

In the new (2006) book by Konrad Scheicke ‘Historic Movie Theatres in Illinois-1883-1960 it states:
Hippodrome Theatre opened on 1st January 1919 and closed in 1967. Seating capacity was 1,200. It was re-named Marlow Theater in 1941 after the then owner James Marlow. It carried the name 'Hippodrome’ on the marquee until it was demolished in 1967. The address in this new book is given as above at 14 S. 13th Street.

Living in Murphysboro at the time, I am adamant that the book is in error, and the theatre was not torn down during the time I lived there. It stood until early 1969. Although closed since early 1968.

If the book is in error then the people in the library are in error. The librarian told me that he watched the theatre being torn down in 1967. If you have a problem with that please contact the library in town.
konradschiecke

The Marlow’s Theatre that was formerly known as the Hippodrome was located in Herrin, not Murphysboro, Illinois. The Marlow’s in Murphysboro was operated by the brother of the man who owned and operated the one in Herrin. The Hippodrome burned in the 1930’s and was rebuilt as “Marlow’s Fireproof Theatre” in the same spot. The building was demolished in the late 1960’s to make way for a municipal parking lot. The Murphysboro Marlow’s was still in operation into the early 1970’s.

Although I don’t know much about this theater my Great Grandfather (John Marlow) was the owner. My father used to tell me stories about this theater and other businesses that his grandfather owned in Herrin (White City Park, Southern Beverage Co., Ly-Mar Hotel etc..). It would be great if someone had a picture of this place.

In 1955, the operators of this theater filed a lawsuit against a goatload of movie companies and Fox Midwest Amusement Company (a large theater circuit in the region.) The third paragraph on this web page has this information: “… Grand Opera Company has since 1917 owned and operated Marlow’s Theater in Herrin, Williamson County, Illinois; that Marlow’s is a large modern building with 1,400 seats, equipped to exhibit feature first-run motion pictures, is located in Herrin’s business district, and has a drawing potential from among persons residing within a radius of 25 miles.”

I’ve heard of a boatload, Joe, but never a goatload. Interesting visual image, though.

There was a lengthy article in the Southern Illinoisan on 12/20/64 about a large part of downtown Herrin being paved over for urban renewal. I will post just the part about the Marlow theater, although if you lived in Herrin you would enjoy the block-by-block synopsis of the old businesses.

Directly south across Madison Street from the hotel building is the massive Marlow Theater, where peeling pictures of movie stars decorate the brick walls. The Marlow Theater has closed and nobody talks about reopening.

The hotel and theater buildings are the property of the Bank of Herrin, which paid $147,766 in foreclosure of mortgage actions last May after the death of John Marlow. He was president of both the Herrin Hotel Corp. and the Marlow Amusement Co. The hotel sold for $107,493 and the theater for $40,272.

The existing theater will be razed because it simply is too big for Herrinâ€™s demands. It costs less now to build a theater than it did when the Marlow Theater was built.

The Marlow Theatre in Herrin also opened under the name Hippodrome. A book called “Williamson County Illinois Sesquicentennial History” has a bit of information about it. The operating company was called the Grand Opera Company, and was a partnership of brothers John, George, and James Marlow with Paul Columbo.

The Hippodrome opened on November 24, 1917. It operated primarily as a live theater, but later an annex theater was built next door to it where movies were shown. By “next door” the book must mean behind, as that’s where the Annex Theatre listed at Cinema Treasures is located, facing on the next street west.

An item about the opening of the Murphysboro Hippodrome in the November 15, 1919, issue of trade journal Motion Picture News referes to John Marlow as “…president and manager of the Hippodrome Theatre at Herrin, Ill….”

I posted a photo of the Theatre and a biography published about it from the Williamson County Illinois in the World War: 1917-1918" book. The biography mentions the theater that the Marlows built called the ANNEX which has been beautifully restored by Dr. Van Acker and is now home to several offices and The Annex Deli. It also mentions the theater that they had built in Murphysboro, Illinois, that is mentioned in several posts above.