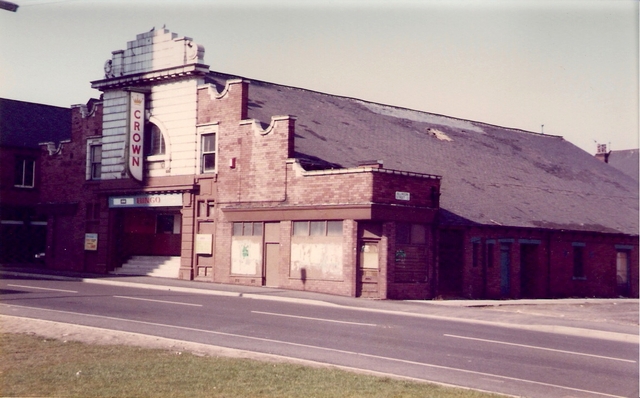 Located in the Wortley district of Leeds, the Crown Cinema was built in 1916, but not completed and opened until 31 March 1919 with “Over the Top”. The architect was J.P. Crawford of Leeds and the original proprietors were Myles and William Read.

By 1943 it was part of the local circuit of Leeds and District Picture Houses with a reduced seating capacity of 871 (from 899), and a weekly change of programme - indicating that it was at the time a successful suburban. The proscenium width was 17 feet.

The cinema closed on 21st September 1968 with Kenneth Williams in “Carry On Doctor” plus “The Plank” and like so many others, was converted into a Star Bingo Club.

The quaint façade in cream & green faience tiles is all that remains of this early cinema. After the Star Bingo Club closed, the auditorium was demolished and a factory built on a slightly enlarged site. In 2007, this had closed and the building was ‘For Sale’

The Crown Cinema can be partially seen as it was in 1960 in this photo.