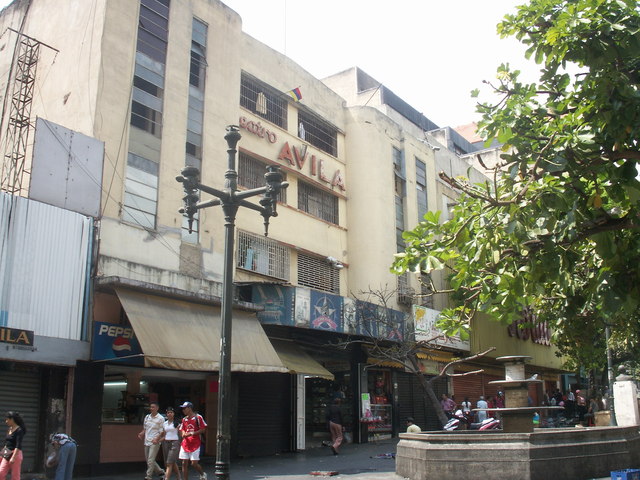 The Teatro Avila is located on Avenida Sur 4 between Bolsa Esquina and Mercaderes Esquina in the central district of downtown Caracas. It is named after the large Avila mountain range which runs to the north of the city.

It opened on 24th February 1939 with Louis Rainer in “The Great Waltz” and for many years became the premier cinema for screening MGM movies. The Venezualan premier of “Gone With The Wind” was held here on 12th September 1940.

At the time it was built it was the most modern cinema in Caracas and it was designed in a mixed architectural style of Art Deco and Art Moderne by architect Rafael Bergamin. It was the first cinema in Caracas to be decorated with large murals located in the foyers and these were painted by Rafael Rosales to spectacular effect in a space that was dominated by the colours black and white.

Inside the auditorium seating was provided for 784 in the stalls and 506 in the balcony. The cinema was equipped with a large stage which was put to use in the early years.

Another innovation was that this was the first cinema in Caracas to have a soda fountain shop.

During its final years of operation, the Teatro Avila was twinned and was known as the Cine Avila. Today, faded posters of the final movies to play at the Avila are still in their frames on the marquee: “Simpatico”, “Bowfinger”, “Cruel Intentions” and “Saving Private Ryan” which dates the closure as 1999. The stalls area has become a retail space with numerous small shop units. The balcony foyer is now a restaurant and the balcony section of the auditorium has been extended across to the proscenium and is now the Avila Club, a gay nightclub which caters for a mainly black/Latino crowd. The murals painted by artist Rafael Rosales survive in the foyer area as does a large Art Deco style base-relief panel.