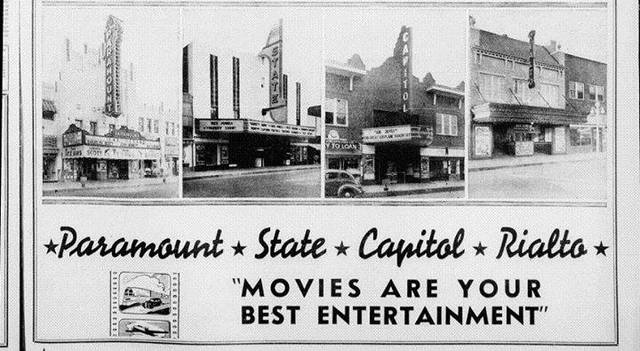 There is a photo of a building at 311 N. Polk on this site. I don’t know if it’s the former Capitol:
http://www.sealing.com/locations/

I don’t remember what my source was when I added the theater. I can’t tell you if it was N. or S.

Here is an article from the Albuquerque Tribune dated 12/21/54:

AMARILLO, Tex., Dec. 21â€"An early morning fire that apparently had been smoldering for hours gutted the Capitol Theater in downtown Amarillo today. A score of guests in an adjoining second floor hotel fled to safety. A small jewelry store and barber shop flanking the lobby of the theater were damaged badly by smoke and water. The fire began in the back of the building from a still undetermined cause.

The Mission Theatre launched on July 19, 1913 for R.C. Conn. D, F & R Enterprises — Dr. E.J. Dye, H.S. Ford, and Ross D. Rogers took on the theater in 1914 and ran the road show version of “Birth of a Nation.” Later, under new operator Raleigh Dent of Dent Theatres Circuit, Amarillo would get to hear the movies as Vitaphone entered into the mix. The Jazz Singer was an early but not the first Vitaphone heard in Amarillo. “Ham and Eggs at the Front” was that first talkie in Amarillo playing on March 17, 1928.

The theater would be subsumed by Publix which transitioned from Publix-Dent to Publix and would become Paramount Publix. It went into receivership in 1933 and the Mission would become part of the Interstate Circuit which took on much of the Paramount Publix and RKO southern theaters.And then the theater became the Capitol opening August 27, 1937 appropriately enough with “New Faces of 1937.” In 1952, Trans-Texas became the final owner of the Capitol. Unfortunately, just two years into the circuit’s run, the Capitol burned down and was no more in December of 1954. Demolished in 1955, the lime mortar constructed brick building’s bricks were re-used to build two new Amarillo homes.