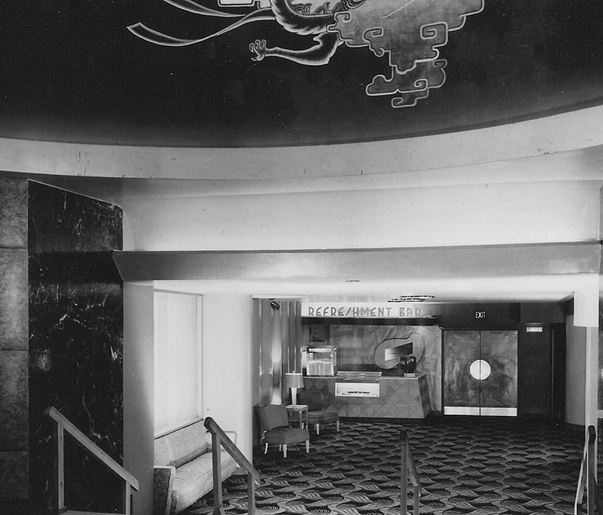 Built in 1948 by B & F Theatres and opened on November 19, 1948 - original Oriental style mural on walls of circular lobby -original Chinese symbol set in terrazzo floor - became East Indian theatre in the 1970’s/1980’s - major renovation in the late-1980’s to become multi-media centre - frequented by John Candy (who may have ushered here as a boy) - now a recording studio and film studio - crazy stories of munitions depots and brothels accessed by tunnels in basement.

This theatre appears in the movie Youngblood. It’s seen at night, with the female lead, Cynthia Gibb, coming out of the lobby, and meeting Rob Lowe after having seen something called “Slumber Party Massacre”.

Is there any more info on the munitions and brothels accessed by tunnels? That’s great stuff.

The Donlands Theater has a For Rent sign on it (Nov 2006). Recent photos of it and other Toronto area theaters can be seen at:

I lived on Donmore Avenue (Donlands and Mortimer) as a young boy (1966-1973), which was a few blocks away; thus, I saw a lot of films there with my father in those years(although the only one I definitely remember seeing was a (non-cinerama) reissue of ‘How The West Was Won’).

I lived nearby there again briefly in recent years, and would always get a warm feeling walking by and thinking of my late father, who instilled the passion for cinema in me (thanks pops).

Canadian roots rock stalwarts Blue Rodeo recorded their second LP ‘Diamond Mine’ at the recording studio that was/is(?)resident there in the late ‘80s.

Lived on Plains Road in the early 70’s and this was my weekend home away from home.
Loved the occasional horror double-features.
Still very much missed.

The Donlands opened in 1948. I was among the first customers.

This theatre was built by Sam Bloom and Sam Fine B & F Theatres,Limited, a Famous Players affiliate,just after the war!!

Back in 1945, I remember a sign on the Donlands theatre location that read something like this: “After victory, a 1000 seat theatre will be built on this sight.”

My brother and I used to discuss what film would be the first one to play the new theatre. Well, the theatre was built (not quite 1000 seats), and the first film was the 1948 movie “Tap Roots” starring Van Heflin and Susan Hayward.

This location, the Donlands Theatre was another of a handful of great Bollywood Theatres during the 1970s & up until the mid-1980s. Many of the great stars shown included Sanjeev Kumar, Shashi Kapoor, Amitabh Bachchan among others… owners included, the Late Charlie Mehra of Friends Films & The Executive Motor Hotel & Mr. Darshan Sahota. Oh but wait… this great venue was not ONLY a cinema house, some of South Asian Entertainment’s elite also graced this stage. With names like the Late Parvez Mehdi alongside tabla master Ustad Abdus Sattar Tari in December of 1982,renowned film playback singer K. Yesudas with Sujata & others in March of 1983, not to mention the Late Jani Babu with Qatil Banu & Dilawar Babu in Oct. of that year + countless Mushairas (Poetry Readings) with Indian, Pakistani and North American (Canada & US) elite names..This is where we had a slightly smaller & a touch more northern version of “Little India” with stores like Anita Saree Centre, Uma Sarees & a tiny mall / food court in the form of “Chandni Chowk”.