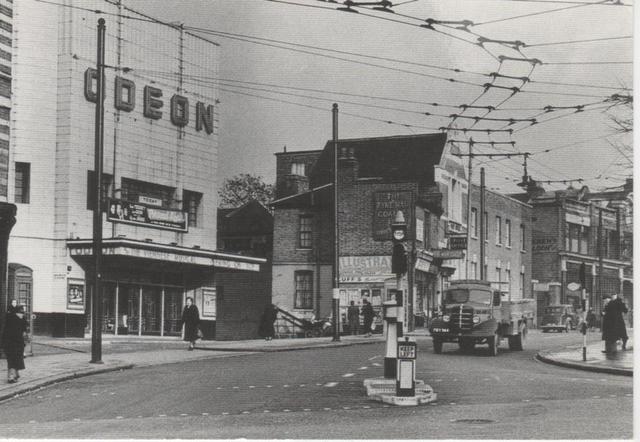 Located in the west London district of Acton. Built as one of the original Oscar Deutsch chain of Odeon Theatres Ltd., it opened on 8th November 1937 with Leslie Banks in “Farewell Again”.

Noted cinema architect George Coles designed this modern Art Deco style cinema which had a rather plain flat facade covered in cream faiance tiles, relieved only by a set of windows above the canopy and ridged tiles along the top. The main feature was a stylish tower which rose to the left of the facade that had the name ODEON letters set into open curved bands.

Inside the auditorium seating was provided for 1,230 in the stalls and 640 in the balcony. It was illuminated by two narrow stips of linear lights set into the ceiling and a long linear light on each side wall. On the side walls at each side of the proscenium there was a large round circular feature that was backlit.

The Odeon led an uneventful life and ended up being the last cinema to operate in Acton when it closed on 18th October 1975 with Lynn Redgrave in “The Happy Hooker” and Ann Todd in “The Fiend”. The building was converted into a B & Q DIY store (home improvements). It eventually closed and the former Odeon was demolished in 1988 and a Safeway Supermarket was built on the site. This is now a W.M. Morrison supermarket.

A photograph of the Odeon in the early 1970’s (possibly 1971). Unfortunately, only a small lower portion of the tower feature on the upper left of the building can be seen:
View link

A view of King Street, from the High Street in December 1953. Again not showing the tower feature on the facade of the Odeon. Postcard issued by London Borough of Ealing, Local History Series in 1994:
http://www.flickr.com/photos/kencta/149782451/

here’s another picture. albeit lo-res scan, higher to follow

A vintage photograph of the auditorium:
View link

I demolished the Odeon Acton when I worked for Ealing Council. It was originally part of the site that was to form a new Acton Town Centre redevelopment that was being proposed by St Modwen. This redevelopment never progressed and as stated it became a Safeway Supermarket that became a Morrisons when they took over Safeways UK operations.

The large round circular features mentioned in the narrative about were carefully taken down by the demolition contractor, T E Scudder. They were relocated to what was the Odeon Northfields (about 3 miles away) which by this time had become the Top Hat nightclub, which was owned by the Carey family who were also part owners of Scudders.