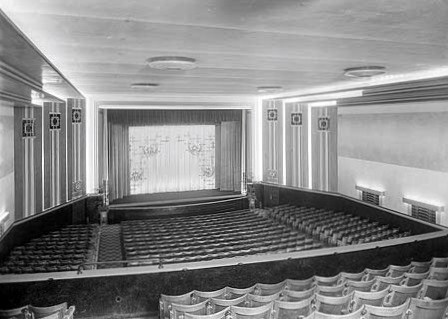 Located in Corby, Northamptonshire at the corner of Rockingham Road and Stephenson Way. Built for Oscar Deutsch’s Odeon Theatres Ltd. chain, the Odeon opened on 16th March 1936 with Jesse Matthews in “First A Girl”. A local architect Lawrence M. Gotch designed the cinema, which had seating provided for 770 in the stalls and 272 in the stadium balcony which did not overhang the stalls. It was equipped with a British Thomson-Houston(BTH) sound system.

It was taken over by a local independent operator from 19th January 1969 and re-named the Rutland Cinema, but this was not successful it closed as a cinema in November 1969. It then became the Rutland Bingo Club which closed in 1991. There were plans proposed to turn it into a Chicago Hard Rock Café, but these were dropped. It was in use as a furniture store from 1996.

Last in use for many years as A6 Furnishings, the former cinema was used as a showroom warehouse selling cheap pine furniture until it closed on 28th February, 2022. In April 2022 plans were approved to demolish the auditorium and build flats on the site, retaining the façade.

It has not been entirely stripped of its guts and I feel sure it could be restored to its original “glory”.

It is depressing to see the lack of respect for what should be a protected building.

In July 2022 it reopened as a furniture store.

A vintage view of the exterior of the Odeon Corby. I am unable to date it, but possibly mid-1950’s:
View link

Some 20 years ago I searched the country for Cinemas to take over… with difficulty.. (for Cinema use) How times have changed.. Now I am to old.. and wise.. alas

It wouldn’t take too much work, proscenium still in place, as is circle all though a metal mezzanine floor has been put in, I’m unsure about the projection box, but the stalls floor has been leveled.

I would love to own a cinema, if only I had the money. I would show loads of old classics, cult, indie and retro movies, not just all the most popular latest releases.

Does anyone know if American producer Robert Radnitz’s final movie, “The Little Ark,” had a theatrical release in the United Kingdom?

Some photos from September 2019 here:–

Permission has now been granted to demolish the auditorium whilst keeping the facade. Flats will be built in its place.

This building seems to be a like a cat with nine lives!

The building has reopened again this week as a furniture warehouse.