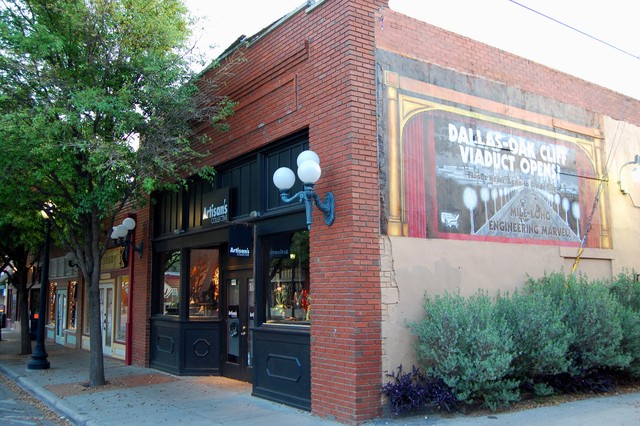 Located in the Oak Cliff section of the city, it opened as part of the Ed Foy Neighborhood Theatres circuit in 1919 as the Rialto Theatre. The owner died in 1924 and other independent operators then ran the theatre. In 1933 it was renamed Bishop Avenue Theatre, then in 1934 was rechristened Astor Theatre and was remodeled.

Sometime thereafter the Interstate Theatre Circuit took control of the Astor Theatre. Following their operation, the Robb-Rowley organization acquired the theatre and operated it until it closed in 1950.

The theatre has been used on and off as a nightclub since its closure. It was last used as an antique store, but currently in 2010 remains unused.

Update to the above: In 1926 the theater housed the Oak Cliff Little Theater, using dressing rooms and offices across the alley from the building.

After closing, the Astor sat empty for a few years, then became the Astor Nightclub. Following that incarnation it housed Key Transfer and Storage Company and a 1960 fire almost destroyed the building.

No longer even resembling a theater or adorned with anything to show that it was a showplace for films and live theater, it was recently an antique/art store and is currently vacant.

The Old Mill Theater on Elm Street downtown reopened after an extensive remodeling as the Rialto in 1935, according to Jeanette Crumpler’s book “Street of Dreams.” Guess by then the name had become available.

A Different view of the Rialto/Astor Theatre structure..